First climate mitigation plan since 2007 to be published next week 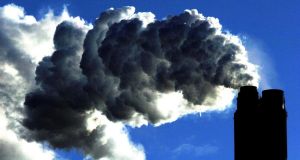 Under the Climate Action and Low Carbon Development Act 2015, the Minister for Communications and Climate Action was obliged to submit a national mitigation plan to Government for approval no later than June 10th this year. File photograph: John Giles/PA Wire

Ten years after the first national mitigation plan was published, its long-awaited successor will be published on Wednesday week.

Minister for Communications and Climate Action Denis Naughten will publish the plan, which will purport to show how Ireland can reduce its greenhouse gas emissions to near zero by the end of the century.

Mr Naughten was obliged to submit a National Mitigation Plan to Government for approval no later than June 10th, 2017.

His spokeswoman confirmed last night he did so on June 9th but the publication was delayed because one or two “minor details” had to be ironed out.

She said the substantive plan had been submitted and the further details now being included were not ones that required formal Cabinet approval.

They included a section on the proposed merging of Bord na Móna and Coillte operations to create a new bioenergy company.

A draft of the plan was published in March to wide criticism because of its lack of specific targets. The mitigation plan is essentially designed to set out how Ireland can comply with the climate change targets contained in the Act, and also to meet stringent EU and UN targets on emissions reductions.

At the time, Mr Naughten accepted that the draft was incomplete and did not contain many new measures. It set out the challenges in four sectors: electricity generation, the built environment, transport and agriculture. He said the plan would be a “living document”, with work continuing on an on-going basis.