A bunch of 10 wild roses by any other names 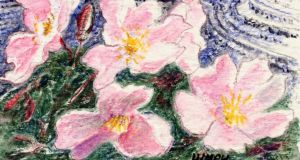 A rather grand old lady I had the pleasure to know lived beside a river beyond the hill. Her garden was big and shady, semiwild and full of treasures – dazzling azaleas, towering rhododendrons, big, blue Himalayan poppies, other rare and lovely things.

Among them was a climbing rose, swathing a pillar on the way to her door. A tower of creamy blossom in June, it was kept closely barbered by the gardener, who knew it as “the Leenane rose”. I lifted a few of his cuttings for our own home patch, then quite raw and flowerless.

Watching Channel 4 News last night, I was distracted by a blackbird beyond the window, flickering back and forth every few minutes to feed its young, diving beaklong into this rose bush, if you can call it a bush. A dense mound some 10m wide and 4m or 5m high, it wraps around our ESB pole, and its highest clusters of flowers shine surprisingly among the branches of a neighbouring ash tree.

Our rose bush climbs with ferocious prickles, so I was wincing for the blackbird at every plunge and exit

It climbs with ferocious prickles, so I was wincing for the blackbird at every plunge and exit. A pity, too, that blackbirds have so little sense of smell: the fragrance of Rosa filipes, between honey and musk, is heady and delicious.

A wild rose of western China, it may be most widely known, for some obscure and folksy reason, as the ‘Rambling Rector’. It is close cousin to a cultivar of R filipes called ‘Kiftsgate’ that rambled from a rather posh garden of that name in the Cotswolds. There the original plant is said to be the largest rose bush in Britain – 24m by 27m, and 15m high – and has its own impressive website.

“Visitors adore it,” one of Kiftsgate’s gardeners says, “and clamour for more rooted cuttings. We want it for the garage, they say gaily, and will not heed the warning that presently they may not be able to get at the car.” If the ESB ever needs to replace our storm-worn shaft of a pole, it must bring its own armour and chainsaw.

The single white petals and gold boss of stamens of Rosa filipes echo many of Ireland’s wild roses, notably the burnet rose of the Burren and other limy places near the sea. My drawing is the lovely pink-flushed form of Rosa pimpinellifolia, but, white or pink, the low, densely prickled cushions of this rose are, at least, easy to name.

Poring over stipules and petioles, carpels and hypanthia, those trying to sort our hedge-bank roses have faced a taxonomic challenge

Ireland’s wild roses, scrambling among hedges, number about 10 native species. But their hybridising habits and costume changes boost the Rosa roster in botanical books to a far longer index of names. Even the burnet rose will mix its chromosomes with several others’ and then, perhaps, go on to a second cross. Poring over stipules and petioles, carpels and hypanthia, those trying to sort our hedge-bank roses have faced a taxonomic challenge.

The sharpest account of it appears in The Flora of County Fermanagh, a massive but lively book published by the National Museums of Northern Ireland in 2012. Its authors, Ralph Forbes and Robert Northridge, bemoaned “an almost pointless accumulation of over 715 records” collected in the county. They had been lumped into “Rosa species” for want of identification, or even into the “rag-bag” of the dog rose, Rosa canina, commonest of Irish species and notably promiscuous.

Field recorders, the authors explained, were using An Irish Flora, long the standard field guide of Ireland’s botanists, in the seventh edition of 1977. Despite the long and hallowed reputation of its creator and co-editor, Prof David Webb of Trinity College Dublin, Forbes and Northridge found its accounts of roses “particularly poor” and “indecisive”.

Webb died just before its publication, but his huge contribution to Irish botany lives on in the name of the next and eighth edition, Webb’s An Irish Flora, written by John Parnell and Tom Curtis and published by Cork University Press in 2012.

Its section on roses reflects intensive new fieldwork by Dr Declan Doogue, who proceeded hedge by hedge through Co Wexford and Co Dublin to explore their many casual liaisons, and growth in different habitats shaped by geology and microclimate.

The Flora of County Dublin, published by Dublin Naturalists’ Field Club in 1998, indexed no fewer than 28 rose species and hybrids. In Wildflowers of Cork City and County (Collins Press, 2009) Tony O’Mahony found even more, with 12 rose species and 18 hybrids, their greatest diversity on hedge banks in limestone country.

He lists three sweet briar roses with an unfamiliar bouquet, the stalked glands of the lower face of their leaflets giving off, when rubbed, “a delicious, apple-like scent”. All such rosy exhalations are likely to address insects, attracting some, repelling others. Human noses aren’t really involved.