A beeline for extinction? ‘Let’s not accept that it’s too late’ 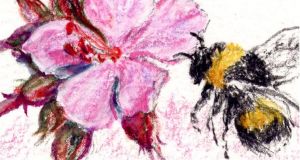 The bees came home late to their hives in our garden in a Dublin suburb the evening we wanted to move them to our new home in the west. So we missed sending them by train and had to set off with the hives in an open trailer behind the car.

This meant driving rather slowly and avoiding too many bumps; given the roads of that time, it took for ever. Dusk was darkening before the two hives were settled beside the stream at Thallabawn.

Ethna, as beekeeper, had watched her mother tending the family hives in Cavan. I was not even apprenticed, but warmed to the arcane mysteries of apian lives. The bees were an Italian strain, supposedly superior and easygoing (this before a ban on importing European queens as the mite-borne disease of varroa swept through Europe).

It soon became clear that our bees were not happy in Connacht’s wind and rain. To keep them through two winters, we had to feed them sugar, rather than sharing in their honey. When Ethna became allergic to the occasional sting, this venture in self-sufficiency came to a close.

We would have done better with the native Irish honeybee, Apis mellifera mellifera, bigger, darker and hairier, more frugal in its habits and adapted to the Irish climate over thousands of years. But its modern survival was not proven until 1996, when three Co Laois schoolgirls won the Young Scientist competition by – incredibly – measuring the wings of 22,000 bees.

Since then, championed by pioneering beekeepers, reviving strains of the native honeybee has progressed well. DNA university research has established that millions of the “black bees” are living in at least 300 hives throughout the country. Pockets of “pure” bee population still exist and show remarkable resistance to disease.

The drive to restoration is led by the all-Ireland Native Irish Honey Bee Society, whose conference will be held at the Athlone Springs Hotel on March 1st and 2nd. And while one of its main speakers, Prof Francis Ratnieks, will talk chiefly about ways to keep bees healthy, his apicultural research group at Brighton University has made other studies of great interest to any wildlife-friendly gardener as spring begins to arrive

As the big All-Ireland Pollinator Plan (at biodiversityireland.ie) enters its fourth year, which plants should gardeners grow to benefit insects such as honeybees, bumblebees and hoverflies?

There’s no shortage of advice online and in books, but recommendations can differ a great deal and lack any scientific basis. Ratnieks and colleague Mihail Garbuzov, dedicated to hard data, have matched professional lists with their findings. Some results are well worth consulting in their paper Listmania.

In their experimental Sussex gardens, for example, they spent two summers logging the visits of foraging insects to individual patches of 32 flowering plants, all very popular with people. While the plants were a fraction of all the thousands of varieties available, their attraction to insects foraging for nectar and pollen varied almost 100-fold, with the standard bright-red “geranium” scoring least visits of all.

Borage, the blue-starred annual, was mostly visited by honeybees and lavender mostly by bumblebees. Open-flowered dahlias did better than those with curled or closed petals The herb marjoram attracted wild bees of all kinds, and agastache, the “giant hyssop”, is another strong favourite.

The Sussex team has countered the long-standing belief that only native plants are useful to native wildlife. This is true, it seems, in some parts of the world, where plants are endemic and native to special climates, but not in temperate Britain or Ireland, where a lot of foreign hybrids do perfectly well in providing nectar and pollen. Even so, most of the plants on sale in garden centres or chosen for parks and show gardens can be disappointingly unattractive to insect eyes and sense of smell.

The researchers surveyed six Sussex garden centres with up to 70 plants in bloom, counting the visits of insects to each. They compared these with visits to the six pots of flowering marjoram, a proven favourite they had brought with them. The “marjoram scores” showed perennials doing rather better than bedding plants, but the results agreed generally with those from the experimental gardens: perhaps five plant genera stood high among the rest.

In one urban public show garden (with many wrong dahlias – cactus and pom-poms), a mere 4 per cent of plants were highly attractive to insects.

Results such as these show how easy it is to fill parks and gardens with dazzling colour that people enjoy but that does little for pollinating insects. We need to bring together the right kind of flowers and the right kind of native bees.

Another speaker at the Athlone bee conference will be Dr Una Fitzpatrick, senior ecologist at the National Biodiversity Data Centre and co-ordinator of the All-Ireland Pollinator Plan. Even as threats to the world’s insects grow severe, Fitzpatrick remains an eternal optimist. “Let’s not accept that it’s too late.”