This week’s weather will be mild and windy with showers 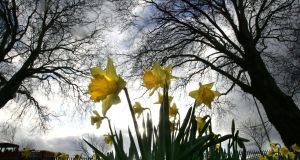 This week will be milder than normal for this stage in February, with temperatures of up to 14 degrees Photograph: The Irish Times

Weather conditions will be decidedly more Spring-like this week with generally mild and breezy conditions across the country interspersed with rain showers, according to Met Éireann

“Temperatures were no lower than five degrees last night and it’s frost free,” they said. “There is high pressure at the moment however it will weaken towards the end of the week and move eastwards allowing for some rain to push in.”

On Tuesday there will be patchy rain and drizzle along the western half of the country but a brighter and drier conditions further east.

Rain will spread eastwards during the afternoon but it will become lighter and patchier and a few limited bright or sunny spells will occur.

There will be another spell of patchy rain towards the evening which will turn heavy across north Connacht and Ulster.

Highest temperatures will be between 10 and 13 degrees in a moderate or fresh southwesterly breeze.

Wednesday will be a cloudy day with a little patchy rain possible along western coasts at times, but otherwise it will be largely dry with sunny spells in the east and south. Highest temperatures will be between 11 and 14 degrees.

Wednesday night will see temperatures drop to six and seven degrees and it will be mostly dry, with clear spells developing.

Thursday will be a mainly dry day with temperatures between 11 and 13 degrees with a moderate to fresh southerly wind.

Met Éireann said the progress of a cold front will bring wind and rain on Friday with temperatures between 11 and 13 degrees.

As a result frost is likely on Friday night as skies clear.