‘Why am I living in Ireland when there is free education in other countries?’ 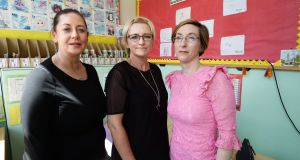 Sarah Eustace from Dublin has a six-year-old going into first class and she is facing a bill of €500 “or maybe even a bit more than that”, she says.

The book rental scheme will cost her about €130 although she points out it includes stationery. He son will need a crested jumper and a “two-tone tracksuit that is only available in one shop”.

There is also an eye-watering voluntary contribution of €250. “I know that is a huge amount of money,” she says. “The school is quite new and has a small number of students and they say they are not getting enough money from the Government to cover their costs. I couldn’t afford to pay it last year,” she says. “I paid it the first year but I simply couldn’t afford it last year and I don’t think I will be able to afford it this year. Of course that makes you feel bad and you do wonder if you are the only one not paying it.”

But there is little she can do if she doesn’t have the money. And she doesn’t . “It is €500 even without the voluntary contribution and with the high cost of renting a home and everything else, it’s just too much. Then there are the workbooks, they are very expensive and can’t be reused so it is just like you’re throwing money away.

She says she is getting to the point “where I wonder why I am living in this country, why am I living in Ireland when there is free education in other countries. And the thing is it is an easy fix for the Government. All it needs to do is recognise the importance of education and prioritise it.”