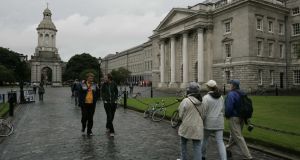 Irish universities have recorded a surge in applications from international students which academics say is linked to uncertainty over Brexit and the election of US president Donald Trump.

The upward trend, along with our rising young population, raises the prospect of universities capping the number of places available to Irish students.

Earlier this summer, UCD president Andrew Deeks said such a move would have to be seriously considered unless there was movement by the Government on funding the expansion of higher education.

The Irish Universities Association has also warned that the third-level system would not be able to expand much further unless additional resources were made available.

Ned Costelloe, the association’s chief executive, said: “Addressing the capacity issue is becoming increasingly urgent. It will affect national and international recruitment [to college], unless we do something soon.”

The spike in applications among non-EU student numbers is mostly from India, China, the US and Canada. These applications are mostly at post-graduate level. International students are highly lucrative for colleges given that they pay significantly higher tuition fees.

UCC president Patrick O’Shea said that while the sector was under pressure, Irish students should not lose out as a result.

“[At UCC] we’re not going to admit international students at the expense of Irish students, nor will we admit them simply for money. This is an opportunity to focus on quality and build the capacity of the system,” Mr O’Shea said.

“Where students might have thought of the UK only, they are now hedging their bets and applying not just to the UK, but to other English-speaking colleges,” Mr Prendergast said.

Government moves over recent months to make it more attractive for foreign students to study here after they graduate may also be factors behind the increases. Students from India, for example, may now remain in Ireland for two years.

Pressure on capacity at third level is also likely to be increased with greater numbers of students in Ireland choosing to remain at home rather than studying in the UK. Latest figures bear these trends out, with a drop of 18 per cent in the volume of Irish students applying to the UK’s Ucas system.