Brexit and higher education: ‘The interest in Ireland is amazing’ 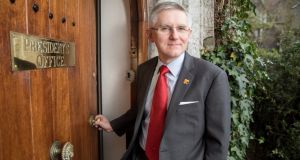 While most university presidents smoulder over Government cuts to funding and serious threats to quality of education, University College’s Cork’s new president is in upbeat mood.

“Ireland is in an extraordinarily strong position internationally,” says Patrick O’Shea, who returned from the US earlier this year to head up his alma mater.

“I was in Beijing just before Christmas and the interest in Ireland is amazing, possibly because of what’s going on in Britain and the United States. There is certainly something driving interest.”

His sunny outlook is understandable: most Irish universities have recorded increases in applications from international students; at UCC the surge is up by some 40 per cent.

Meanwhile, UK universities, worried at losing out on lucrative EU research funding, are beating a path to Irish colleges to discuss potential partnerships and alliances.

On paper, a post-Brexit world represents a golden opportunity for the State’s universities.

Our status as the biggest English-speaking member of the European Union means we could benefit from world-class academics seeking an Irish home, while opening the door to eye-watering amounts of EU research funding.

But O’Shea, who prides himself on his optimistic outlook, acknowledges there are big challenges.

Following a decade of austerity-era cuts, much of the State’s higher education system is creaking, leading many to question sector’s capacity to seize the opportunities presented by Brexit.

The president of University College Dublin warned recently that it may need to reduce the number of places available for Irish students to preserve quality. It is not a step the new UCC president is prepared to contemplate, however.

“We have limited capacity to respond,” concedes O’Shea, “but in UCC, we’re not going to admit international students at the expense of Irish students, nor will we admit them simply for money. This is an opportunity to focus on quality and build the capacity of the system.

“We’re one of the smallest campuses in terms of acreage ... but we have ambitious plans to grow in several locations.”

As for how partnerships with UK universities may evolve, he says it is early days. He confirms, however, that UCC is exploring ideas such as dual degrees, which could be issued in conjunction with UK colleges.

“We’re the only university in Ireland that gives dual degrees at present. We do it in partnership with Cork Institute of Technology [honours degree course in architecture]. It works very well.

“The idea of dual-degrees is something that has been around for a long time, and, clearly, British institutions I’ve spoken to are very interested in that. It allows everyone to benefit, in a sense.

“There are huge advantages to somebody who gets a degree from a EU university as opposed to a UK university in terms of post-graduate work. Ireland has a fairly generous post-graduate work situation. So, I think they are looking at all options to avoid and mitigate a possible implosion in foreign students over there.”

There is an elephant in the room, however: funding for higher education has been dwindling. The fragile make-up of the Government means there is little appetite for controversial measures such as a student loan scheme.

Yet, a sustainable funding model will be key if Ireland is to benefit from the UK’s decision to leave the EU.

The State’s biggest universities have so far managed to keep their heads above water by generating most of their income from non-governmental sources, such as fees from international students and research.

O’Shea, a former vice-president and chief research officer at the University of Maryland, has no expectation that the Government is going to write a blank cheque anytime soon.

“The State doesn’t have the money right now ... so we have to look to industry ... The taxpayer is paying plenty. Personal tax rates are high, corporate tax rates are not so high.”

He says individuals who benefit should also be prepared to pay - if they have the means to do so.

“Those who can, should pay. Those who can’t, shouldn’t. And there should be a slinging scale.

“I’m a good example: I came here [to UCC] on scholarships and grants. Neither of my parents finished secondary school ... ”

He also accepts that if the sector is to benefit from funding in the future, it has a job of work to convince the State, employers and taxpayers.

“We are still producing graduates who are are valued nationally and internationally,” he says.

“We’re doing so extraordinarily efficiently, compared to American universities. But we still need to be able to demonstrate that we can create more value than we consume.

“We have to be able to demonstrate that to industry, government, to Mr and Mrs Murphy down the street.”