Vast majority of parents worried about safety of schools 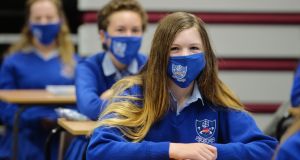 The vast majority of parents are concerned about whether their children’s schools will be able to provide a safe environment.

The results are based on an online survey of a national sample of 1,333 parents or guardians conducted earlier this month by the Central Statistics Office (CSO).

While 86 per cent have concerns over safeguards in schools aimed at curbing the spread of Covid-19, of those, 32 per cent are “extremely” or “very” concerned.

A small but significant proportion of parents – 6.5 per cent – reported they will not be sending their child to school due to health concerns.

While the survey shows high levels of concern, one in five parents say they are unlikely to vaccinate their school child even if a jab for Covid-19 becomes available. The likelihood of parents availing of a Covid-19 vaccine for their children increases with their level of education. For example, parents with a college degree or higher were significantly more likely to avail of a vaccine compared with those with second-level education only.

The survey also found that school closures have had a significant impact on children of all ages. Among those with a child due to sit the Leaving Cert next year, some 67 per cent said the closures had a major or moderate negative impact on their child’s learning.

Most pupils themselves are also concerned about returning to school and complying with social distancing rules, reconnecting with classmates or being away from home.

The level of concern is lowest among children in the early years of primary and peaks in the junior cycle of secondary school.

Many parents also reported that their children spent relatively short periods of time on learning during the lockdown.

The survey also explores the likely impact on parents if schools close again. About half say their work will be disrupted. A total of 17 per cent of female respondents with a primary school pupil reported that they may have to give up work compared with 4 per cent of males.

Meanwhile, a group of academics and scientists has warned that the reopening of schools will increase the risk of community transmission of Covid-19 and put pressure on our testing systems.

The Zero-Covid Island group said case numbers were rising across the country along with widespread community transmission due to a policy choice of “living with the virus”.

As a result, it said there would very likely be school outbreaks, as seen in many other countries.

“If the rate of transmission of the virus in the community is brought down, we expect to see fewer outbreaks, and less disruption to education,” said Prof Anthony Staines, a member of the Zero-Covid Island group.

“However, all schools will need to be able to offer distance learning to their students.”

He said that as long as we continue with the current policy of living with the virus, our return to school would be risky.

“While opening schools has to have a high priority, current conditions pose some risks for children, teachers, families and the community. Schools are working hard to manage these.”