Future of cafe will depend on Dubliners seeing it ‘as relevant’, operators say

Bewley's cafe on Grafton Street in Dublin has reopened following an extended closure due to Covid-19 and a rent dispute with its landlord. Video: Bryan O’Brien 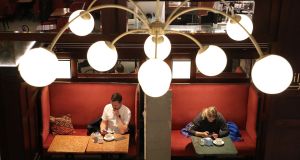 Bewley’s cafe on Grafton Street in Dublin has reopened after announcing it was to permanently close earlier this year.

The cafe was opened to customers again on Thursday morning and is initially offering table service and a limited menu.

Paddy Campbell, artist and owner of Bewley’s cafe, said “we’re really happy to be back open again” despite operating at less than a fifth of its capacity.

“We have to be conscious of Covid so we can only let in so many people at a time, we have the capacity for 400 people in this building,” he said.

“At the moment we can only let in 50 so we have one-fifth of our capacity. That’s not an easy burden to carry but we believe that the values are very important, that Bewley’s is a legacy, Bewley’s is something that we have a commitment to keep going and we hope that the public will support us.

“We can’t take in enough people to pay the rent obviously but as the business builds we hope the public will support us and support their own cafe because this cafe belongs to Dublin, not to me, not to anybody else, to Dublin and therefore it’s very important that we all participate in not just opening it today but keeping it open.”

The cafe had been closed since March 16th, when the Government introduced lockdown restrictions and the decision to close the cafe permanently was announced in May.

The cafe’s 110 staff had been informed on July 1st that they were being made redundant, with the closure blamed on the impact of the Covid-19 pandemic on the economy, and the €1.5 million annual rental cost on the protected structure.

The cafe has been loss making for several years with the rent accounting for 30 per cent of its annual sales.

It emerged at the end of last month that Bewley’s had agreed to pay more than €749,000 in rent arrears and interest costs to Ronan Group Real Estate (RGRE), the landlord of the cafe. RGRE is controlled by property developer Johnny Ronan.

Cól Campbell, son of Paddy and managing director of Bewley’s, said the future of the cafe largely depends on Dubliners and that “they see it as relevant”.

“It will require a deep commitment but we’re up for the challenge,” he said. “In May things looked really bleak, that was the pit. What changed was the journey that we went on... the changing health outlook, perhaps a less bleak economic outlook and a great belief in the resilience that Bewley’s has shown almost over two centuries of life.”