Abbott’s 15-minute Covid test gets emergency authorisation in US 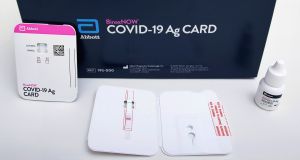 A 15-minute Covid test from Abbott Laboratories that will be priced at just $5 (€4.30) has been granted emergency authorisation for use in the US, a breakthrough that could ease the bottleneck that has crimped much of the nation’s testing capacity.

The company’s shares surged 8.9 per cent in premarket trading. The product, BinaxNOW, works without relying on laboratory equipment. It uses a nasal swab and a small reactive card, and it can be administered by a range of healthcare workers, including pharmacists, at almost any location.

Abbott will start shipping the test within two weeks and intends to manufacture 50 million tests a month by October.

The new test “can be used at a massive scale to help overcome the current waiting game for test results”, said John Hackett, divisional vice-president of applied research and technology at Abbott Diagnostics, in a telephone interview.

The test uses so-called lateral flow technology, similar to the method allowing at-home pregnancy tests. Essentially, these tests run a liquid sample along the surface of a pad with reactive molecules to show a result. While a pregnancy test is designed to detect a hormone, Abbott’s BinaxNOW looks for an antigen, a tiny portion of the coronavirus protein that’s collected from inside the nose.

“It’s detecting them at a critical point in the infection cycle, when they are at the highest risk of spreading disease,” Mr Hackett said. “This will be a powerful tool in preventing the transmission of the virus and helping us return to normal life.”

While several other companies are selling antigen tests that also work quickly, they require some equipment to get the results. The technology also sometimes yields lower accuracy in exchange for working faster. The BinaxNOW is 97.1 per cent sensitive, meaning it correctly diagnoses those with the infection that often, and 98.5 per cent specific, meaning it’s correctly ruled out for those without it. – Bloomberg