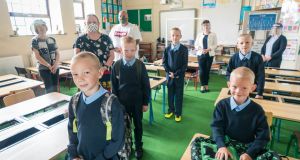 A Dublin family’s desire for a safer, simpler life in the countryside has resulted in a “godsend” of extra pupils for a primary and a secondary school in east Co Mayo.

At the same time, three other members of the same family – Scott (16), Sasha (15) and Ruby (12) – were being shown their new classrooms at the St Joseph’s secondary school in nearby Charlestown.

In recent months, the Purcell clan, comprising Diarmuid and Sandra and their eight offspring, have happily settled into a bungalow on a half-acre site which they purchased in the townland of Carralackey, a few kilometres from Ireland West Airport, Knock. Diarmuid and Sandra are natives of the Navan Road and Glasnevin areas of Dublin.

“We absolutely adore it here,” explained Diarmuid, a former Dublin taxi driver, on Wednesday. “There’s peace and tranquillity, no crime, no drugs. Our kids have a better chance here than they do in the city.”

At three-teacher Kilmovee National School, staff have welcomed the newcomers like manna from heaven.

We were always a three-teacher school, never slipped back to two. Now we will be remaining that way

The arrival of the Purcells means that school enrolment is now 54 instead of 49. The latter enrolment would have left the school one pupil short for the retention of a third teacher.

School principal Mary Warde explained: “We heard just before lockdown that five extra pupils were on the way.”

“It’s huge for us,” said Ms Warde. “We were always a three-teacher school, never slipped back to two. Now we will be remaining that way.”

Frequent handwashing, ventilating classrooms, the provision of sanitising stations and the reconfiguring of toilet areas to avoid any cross-movement between classrooms are now the order of the day.

Says Ms Warde: “We have also identified designated isolation areas so that if a child or staff member becomes ill they can be isolated.

“We have purchased a ‘fogging’ machine which sprays a sanitising liquid every evening in a short space of time.

“Parents seem happy enough about our precautions. We keep them well informed. I think that where there is a void of information concerns might arise.”