Garden shed will have to be used as Covid-19 isolation room, says school 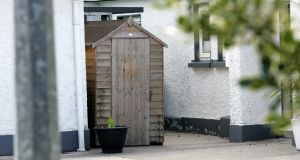 The garden shed being used as an isolation facility at Clonbonny National School near Athlone, Co Westmeath. Photograph: PM/Saber Photos

A primary school in Co Westmeath says it will have to use a garden shed as an isolation room if any child displays symptoms of Covid-19.

Staff at Clonbonny National School, near Athlone, have also criticised what they described as a lack of assistance from the Department of Education in finding additional space to comply with physical distancing rules.

In one classroom, school principal Joan Donnelly said there were 37 children sharing a classroom without the recommended one metre distance between desks.

The Department of Education said on Wednesday that it was in contact with the school in relation to its accommodation issues.

In relation to the use of the shed, a spokesman said while isolation areas should be a separate room subject to resources, it may also be “an area within a classroom where a distance of at least two metres from all other people in the room can be strictly maintained”.

He said the configuration of classes may need to be reviewed by the school given that it has five classroom teachers for the 125 pupils, which should allow for 25 students per class.

Minor works grants – usually paid in December or January, had been brought forward to August – had been issued directly to schools to reconfigure classroom space, purchase furniture and rent additional space, the spokesman added.

However, Ms Donnelly, who was unavailable for comment on Wednesday afternoon, told RTÉ News that the department had not responded adequately to its appeal for more space to be provided.

In relation to the use of the garden shed, she said she was not happy with it but said it was the only option as the school had no additional space.

The school has already turned its staffroom into a classroom, while she said the school was told that getting a prefab would require planning permission and a fire certificate.

Ms Donnelly also said the school had its request for an additional special needs assistant (SNA) turned down.

She said the school had applied because the existing SNAs would have to move across four different classrooms, raising the Covid-19 risk.

Cllr Frankie Keena, who has been making representations on behalf of the school, said the school felt let down.

“It’s not good enough. While I’m delighted to see schools reopen, it’s misleading to give the impression that everything is fine. Schools likes these need much more additional support.”

On the school’s request for an additional SNA, the department said an appeal relating to this decision was not upheld and the school was advised of this in writing last week.

It added that there was no provision for schools to apply for additional temporary SNA resources from September in order to support social distancing in schools.

Separately, work is ongoing to find a temporary premises for 100 pupils and teaching staff at Dun Laoghaire Educate Together national school.

The school was told recently that work on a temporary site on Eblana Avenue has been delayed would not be completed until at least September 14th.

In a statement, the Department of Education said issues during the tendering process had delayed the work, but it was not well advanced and due to be completed in mid-September.

In the meantime, it said an alternative site had been found in the area for the first half of September and arrangements were being finalised.