Twenty women-only professorships to be established this year 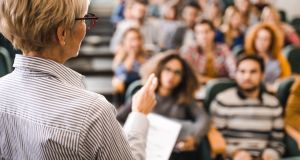 A total of 45 women-only posts are to be allocated over a three-year period. Photograph: iStock

The appointments are in areas where there is “clear evidence” of significant under-representation of women, such as physics, computer science and engineering.

The posts were approved by a 10-member international assessment panel with gender equality expertise, as well as broad disciplinary and strategic level expertise. It is chaired by Prof Lesley Yellowlees, a chemistry professor at Edinburgh University.

The other third-level institutions which secured a single post include CIT, IT Carlow, Athlone Institute of Technology and the Dublin Institute for Advanced Studies.

Recruitment is set to get underway shortly and it is expected that these posts will be in place before the start of the next academic year. A total of 45 posts are to be allocated over a three-year period.

Minister of State for Higher Education Mary Mitchell O’Connor said the move was “truly a game-changing moment” in Irish academia.

“I am incredibly proud that this intervention will ensure a swifter gender rebalance, addressing the current representation of women at the highest levels of our institutions,” she said.

“I am delighted to be able to announce that 12 of our institutions have been successful under this senior academic leadership initiative. I was truly inspired to see the calibre and ambition of the 20 successful posts that are being approved.”

While women make up about half of university lecturers, they account for just under a quarter of professors.

There has also never been a female university president in more than 400 years of higher education.

Ms Mitchell O’Connor’s initiative sparked controversy in some quarters, when it was announced last year, over whether it flouted long-standing recruitment policies which promote equality of opportunity for men and women.

However, the Attorney General is reported to have confirmed that the initiative is consistent with EU and national employment and equality law.

Under the scheme, higher education institutions must develop a gender action plan and show progression on their gender equality objectives and targets before securing funding for additional posts under the new initiative.

Ms Mitchell O’Connor said the excellence of female academics and their contribution to research and education has not yet resulted in an “appropriate level”of representation of women at the highest levels.

“This initiative is supporting higher education institutions that are already taking proactive steps to address gender imbalance to take a leap forward in this area, always with ‘excellence’ at the heart of recruitment and promotion policies,” Ms Mitchell O’Connor said.

She said she had no doubt that the posts will attract outstanding applicants from within the higher education sector in Ireland and internationally.

“Appointments to these posts will be subject to the highest standard and rigorous assessment processes as currently adopted by the institutions for prestigious posts at these levels,” she said.

A further call for women-only professorships will be accounted midway through 2020, she added.

The additional cost for the professorial posts in universities and institutes of technology will be €1.5 million in 2020, growing to some €4 million in 2021.

In a statement, the Irish Universities Association welcomes the posts and said it was fully committed to working with the Minister to promote gender equality across the sector.

* This article has been amended to correct an error.

– professor of public trust in media, arts and technology

– director of engineering research and innovation

-  professor of microbiome and health science

– professor of genomics and biomedical sciences

– dean of graduate studies and research