How can we attract more girls into Stem? 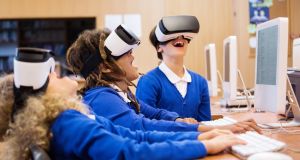 Concerns over attracting girls into Stem (science, technology, engineering and mathematics) subjects have been voiced over many years.

The vastness and sometimes intangible nature of Stem can act as a deterrent to some who lack a direct connection to the field.

Gender stereotypes, the systematic absence of women from the Stem narrative and the lack of prominent female role models in Stem are significant contributing factors.

We know that while most girls show some interest in Stem subjects at 10 or 11 years of age, this tends to wane by age 15.

We also know that in order for girls to engage in Stem subjects, they must see the significance of Stem to their daily lives and believe in their own ability to succeed in the field.

Commenting on the publication of the results, the Minister for Education Joe McHugh stated the Government’s commitment to promoting the uptake of Stem at post-primary level with a key focus on increasing the participation of females.

A recent report published by the University College Dublin’s centre for economic research ( ‘Understanding gender differences in Stem study’, 2019) found that boys were three times more likely to study physics and applied mathematics, and girls were more likely to study chemistry and biology.

Less than 5 per cent of girls studied practical subjects such as engineering, building construction, design graphics and technology.

At CAO level, this translates into over 40 per cent of males listing a Stem course as opposed to 19 percent of females.

Girls in Deis (disadvantaged, or, delivering equality of opportunity in schools) schools are particularly under-represented in Stem in Ireland and are even less likely to pursue Stem courses at third level.

By Junior Cycle, girls have already formed views on whether they have an interest in and confidence to pursue Stem subjects.

Lower rates of participation of this cohort of students at higher level mathematics can also impede their ability to pursue Stem careers at third level.

Increasing gender diversity in Stem is now a national policy priority, but initiatives need to commence earlier in the education system if the Stem pipeline is to be supported.

By Junior Cycle, girls have already formed views on whether they have an interest in and confidence to pursue Stem subjects.

Making Stem meaningful and accessible and building confidence levels in girls to pursue such subjects are thus fundamental to any hopes to bring about a step change.

Challenges also present in relation to schools’ capacity to provide a full range of Stem subject offerings, with boys more likely than girls to attend schools which offer a full complement of Stem subjects.

This situation has been exacerbated by the recent crisis in teacher supply, hitting subjects such as Stem acutely.

Over the last year, researchers at UCD, funded by Science Foundation Ireland, have been working with a range of primary and post-primary Deis schools and their associated feeder and follow-on schools, with a view to exploring girls’ attitudes towards Stem and possibilities for increasing their engagement with the field.

Findings from this research underscore the importance of early intervention at primary level, well before girls are making decisions on subject choices at second level.

It highlights the significance of mentors and role models who can help girls connect Stem to real life issues and people; the value of cross-curricular linkages and teacher professional development; the need to ensure a gender balanced curriculum which reflects the role and contribution of females as well as males to Stem; the need to bring parents and guardians as well as guidance counsellors into the conversation as they play a key role in shaping the decision-making of girls at post-primary level in particular.

And, finally, it underscores the resounding message that girls are well capable of pursuing Stem subjects and careers and that success is not always immediate in some subjects, but that it is ok to be challenged and to take risks.

Professor Judith Harford is vice principal for equality, diversity and inclusion in the College of Social Sciences and Law, UCD.