Plan to double number of pupils in Irish-speaking schools 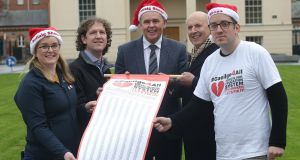 Plans to double the number of students attending Irish-speaking schools feature in a new policy on the language being developed by Minister for Education Joe McHugh.

He wants to increase the numbers attending naíonraí - Irish-speaking pre-schools - gaelscoileanna and gaelcholáistí from 60,000 to 120,000 over the next decade or so.

The aims are contained in the outline of plans for the development of what Mr McHugh says will be the the “first, comprehensive Irish-medium education policy”.

The blueprint will seek to provide a framework for the delivery of high-quality Irish-medium education in schools and early-years settings outside the Gaeltacht.

Mr McHugh is to convene a special consultation process in the Spring and he has requested that it should includes the voice of students and parents.

He said the policy will be developed in collaboration with other relevant departments and will be overseen by an inter-departmental steering committee and supported by an advisory committee comprised of relevant stakeholders.

“Naíonraí and Irish-medium schools play a vital role in developing identity and fluency in our language,” he said.

“The benefits of full immersion in early years and in school are internationally recognised both for a child’s holistic development and also for acquiring the aptitude for other languages.

“There are about 60,000 young people in Irish-medium schools right across the country and I want to see an ambitious target set to double that.”

Mr McHugh said the work will be informed by research into good practice in other countries or jurisdictions such as Wales and Quebec, as well as the initial findings of a research study on education in the Gaeltacht area.

“This is a big opportunity to learn from others, to seize initiatives and to develop ideas,” he said.

“Doubling the numbers in Irish-medium education is a big challenge but we can meet that ambition head on by creating the right foundations in our naíonraí. We should also be looking at ways to deepen community engagement around Irish-medium early years and schools.”

He said there is also a need to look at incentives to attract students from Gaeltacht areas to teaching and increase the supply of those with a high standard of Irish to work in Irish-medium settings.

Another area of focus will be how to boost the number of new Irish-speaking schools under the patronage process as well as expanding additional schools.

For example, the minimum pupil numbers required to establish a gaelchoáiste are 400. Mr McHugh wants to reduce this to 250.

He is also keen on a new approach to the development of naíonrí, such as building them beside gaelscoileanna or associating them with local gaelscoileanna.

New courses in colleges and education institutes for Irish-speaking early childcare workers for naíonrí are also under consideration.

“This new policy for Irish-medium education will raise the profile of our language in our communities and I believe it will also encourage the daily use of Irish inside and outside our schools.”

More students than ever are learning through Irish.

There are also estimated to be several thousand pre-school children attending naíonraí.