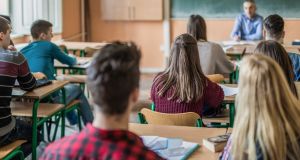 Six new secondary schools are to be established in the greater Dublin area in September 2020. Photograph: iStock

Educate Together and the State-run Education and Training Boards (ETBs) have been awarded the patronage of six new secondary schools that are to be established in the greater Dublin area next year.

The selection process for school patrons has, however, drawn sharp criticism from the largest patron body for Irish-language secondary schools, An Foras Pátrúnachta, which said it was “biased” against them.

The patronage process was based on an online vote by parents earlier this year and was overseen by an independent advisory group to the Minister for Education.

On foot of this, the multi-denominational patron body Educate Together will run a 1,000-pupil secondary school at the former Harold’s Cross greyhound stadium in Dublin 6. The site was purchased by the Department of Education in recent times for €23 million – twice the valuation price – making it the most expensive school site in the State.

There has been controversy locally over the catchment area for the secondary school, which will prioritise students in the Dublin 6/6W area but not students in the neighbouring Dublin 8 and Dublin 12 districts.

Educate Together has also been awarded the patronage of a 800-pupil secondary school in Goatstown, Dublin, on the former Irish Glass Bottle recreation site, where an Educate Together national school is being built.

The Dublin and Dún Laoghaire Education and Training Board (DDLETB) is to run a 1,000-pupil secondary school in the Newcastle and Rathcoole area in west Dublin. It will be based on a site owned by the ETB at Fortunestown Lane.

DDLETB has also been awarded patronage of an 800-pupil school in Blanchardstown.

All of the schools are being established to meet an identified demographic need. Locations have yet to be formally secured by the department for the schools in Blanchardstown, Wicklow and Meath.

The six new schools are likely to open on a phased basis, taking in first-year students during the 2020/21 school year. It is expected that the schools will be established in September in temporary accommodation, pending the delivery of permanent school buildings.

Caoimhín Ó hEaghra, general secretary of An Foras Pátrúnachta, said the fact that no Irish-medium patron was chosen showed the need for a “new process for establishing new schools”.

“If the current scheme continues, the wishes of parents to educate their children through the medium of Irish will not be taken into account,” he said. “We cannot understand how the department can disregard the preference of a third of parents in Dublin 6 and 6W looking for a gaelcholáiste, especially when all current secondary schools in the area are English-medium schools.”

The department said the online vote indicated a “minority preference” for Irish as the preferred language of instruction.

It said that on foot of the level of preferences for Irish-medium education in the Dublin 6/6W area survey, it will “engage with patrons of existing Irish-medium gaelcholáistí and the new schools to ensure that this demand is addressed”.

In some cases, this is likely to take years.

Minister for Education Joe McHugh said the Government was committed to delivering 44 new schools between this year and 2022 to cater for demographic growth. “Parental preference is a key determinant in deciding the patronage of new schools and I’m pleased to say that the views of parents as expressed through the process are reflected in the decisions made on the patronage of these six new schools,” he said.