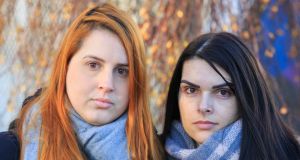 Students at Grafton College, Paola Ambrosio (left) from Rio de Janeiro, and Rosiane de Avila, from Santa Catarina, both Brazil, have been told the college will have no classes for the foreseeable future in Portobello, Dublin. Photograph: Gareth Chaney Collins

More than a dozen teachers and staff from a private English-language college occupied its premises in Dublin on Monday night after learning that they would not be receiving their wages for November.

Saeed Rehman, who owned Grafton College in Portobello, which has ceased to trade with immediate effect, told The Irish Times he “hasn’t a penny left” to pay the money owed to his former staff.

Some 23 people who had been working at the college were called to a meeting on Monday after not receiving their wages for last month on Friday.

They were told the money would not be paid but that plans were in place to accommodate some 500 students affected by the school’s closure at other private language schools in the city. Students said they had paid fees of up to €2,000 for their courses at Grafton College.

About 15 teachers and staff occupied the former college on Monday night, demanding to speak to Mr Rehman and Minister for Education Joe McHugh. Some of them said the news could not have come at a worse time than in the lead-up to Christmas, as they had children to care for.

Mr Rehman, who is based in London, said the college had been losing money “in a very big way and we were not able to meet the day-to-day needs”.

“It was a huge expense and we were not getting that much revenue,” he said. “In the last year, I injected myself €417,000 into the running of the company. But unfortunately it did not go accordingly; we completely dried out with the money. We don’t have any money left.”

Mr Rehman, who has owned the college for the last 15 years, said he had been working through financial issues “for a while” and made “every possible effort” to prevent the college’s collapse.

“I actually worked until the last moment on Friday evening; I was struggling,” he said.

“I even went to a number of people where I can borrow some money or somebody I could bring into the business so at least I can pay my teachers. But at the end of the day I haven’t a penny left at the moment.”

He said he had no access to any other assets that could be used to pay staff.

The international English-language teaching market is worth an estimated €762 million to the Irish economy, according to the Department of Education.

However, there have been a number of cases of language schools closing down suddenly in recent years, and the Qualifications and Quality Assurance Bill, drawn up to regulate the sector, is currently before the Oireachtas.

Roy Hassey, organiser with Unite the Union, said the sector had been “blighted over the last five or 10 years with this sort of situation”, which had left students without anywhere to go and teachers left out of pocket.