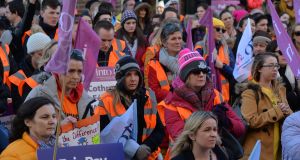 Teachers from the INTO, ASTI and TUI protesting over pay rates for new entrants earlier this year. Photograph: Alan Betson/The Irish Times

In a ballot, members of the Association of Secondary Teachers Ireland (ASTI) voted against the Government initiative on new entrant pay by a margin of 53 per cent to 47 per cent. The turnout was 58 per cent.

The union’s central executive will consider its next steps at a meeting shortly.

Any industrial action would be viewed by the Government as a repudiation of the existing pay deal and would trigger pay freezes and loss of other benefits for members.

However, if members do not embark on industrial action, new entrants will benefit from pay increases due to come into force from next March.

The vote means two teachers’ unions are opposed to the pay deal, with the Irish National Teachers’ Organisation (INTO), which represents primary teachers, rejecting the pay proposals last month. The Teachers’ Union of Ireland (TUI) accepted the deal recently.

In September, the Government tabled proposals to restore pay for “new entrant” public servants recruited since 2011, who are on lower pay than longer-serving colleagues.

Teachers unions’, however, have argued that the pay deal stops short of full pay equality.

Commenting on the result of the ballot, ASTI president Breda Lynch said members were “firmly committed” to achieving equal pay for their lower paid colleagues.

“ASTI members remain steadfast in their determination to achieve justice for their lower paid colleagues - that is, equal pay for equal work,” she said.

“ In 2016 the ASTI took strike action over the discriminatory pay of post-2010 teachers. In taking industrial action, ASTI members lost pay and were further penalised under Fempi [financial emergency] legislation.

“However, their action put unequal pay firmly on the agenda, making it an issue the Government could no longer ignore. Despite this, this latest proposal from the Government represents insufficient progress and does not achieve equal pay. We will continue to pursue the full restoration of pay for our lower paid colleagues.”

A key question facing the ASTI’s central executive committee will revolve around whether to hold a ballot for industrial action.

It is also uncertain whether members would support a vote for industrial action.

Many ASTI members are still feeling the effects of its 2016 industrial action, which led to pay losses as well as a loss of members.

The INTO, meanwhile, is consulting with members in the lead up to a ballot on industrial action. The union requires a two-thirds majority to support any action, which is considered to be a high threshold given that members only narrowly rejected the recent pay deal.