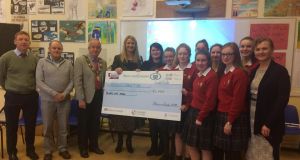 Following hot on the heels on the success of Indreabhán’s Coláiste Lurgan whose videos in Irish have entertained millions across the world, over 300 schools from every county in Ireland have taken part in a national video competition as part of Bliain na Gaeilge.

Gaelfhíseán na Bliana, held by Conradh na Gaeilge, attracted over 300 entries with students from primary and secondary schools participating in the competition.

Schools were invited to create a short video featuring a song in Irish and students had to produce, record and edit the final product.

Seachtain na Gaeilge’s Orlaith Nic Ghearailt said: “the Gaelfhíseán contest was highly competitive and the standard of entries was excellent. It is clear that students really enjoyed taking part in the competition and the teachers all deserve recognition of the effort they put in to the competition.”

The winning schools - one from each county - are each being presented with a cheque for €1,000 this week.

Gaelfhíseán na Bliana is one of many events held as part of Bliain na Gaeilge which celebrates the 125 years since the beginning of the revival of the Irish language.

Earlier this month, students in 340 schools across the country as well as participating groups abroad took part in an annual challenge in which participants were encouraged to speak Irish for 24 hours.