Teachers earned most in years after graduation, study finds 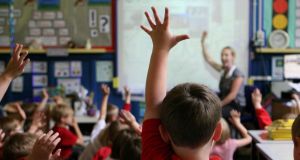 Draft findings indicate that one year after graduation, graduates from education courses topped the table of weekly earnings at €705 a week. Photograph: Dave Thompson/PA Wire

Teachers earned more than other college graduates for several years after completing higher education, according to the draft of a major new study.

However, their earnings increased at the slowest rate of all, leading to other graduates narrowing the gap or overtaking them within five years.

The Central Statistics Offices (CSO) is due to publish research shortly that tracked graduates’ weekly earnings across different fields of study between 2010 and 2015.

Draft findings seen by The Irish Times indicate that one year after graduation, graduates from education courses topped the table of weekly earnings (€705 a week).

They were followed by graduates in health and welfare (€590) and information and communication technology (€470) courses.

Three years later, education graduates still topped the table (€710 a week), though the gap narrowed significantly with graduates from other fields of study such as ICT (information and communication technology) and engineering/construction increasing their earnings at much faster rates.

A spokeswoman for the CSO declined to comment on the findings on the basis that they were still being validated and subject to revision. They are due to be published towards the end of this month.

A draft shows the analysis is based on linking employment and earnings data from the Revenue Commissioners with graduate data compiled by the Higher Education Authority.

The findings indicate that arts and humanities graduates earned the least both in their first year after colleges (€310 a week) and five years on (€525).

They were followed by graduates in services-related courses and social sciences/journalism and information courses.

While education graduates fared relatively well in the draft findings, their pay rose at the slowest rate of all the fields of study graduated.

Over the five-year period of the study, their weekly earnings increased by just 4 per cent.

By contrast, earnings rose by between 60 and 70 per cent for graduates in areas such as social sciences, arts and ICT.

Crucially, the findings related to those hired in 2010, who escaped the worst recession-era pay cuts, such as lower pay-scales and the abolition of qualification allowances for new entrants.

Teachers’ unions estimate that reductions led to new entrant pay being cut by at least 20 per cent.

The Government, however, argues that about 75 per cent of the gap has since been filled with new entrants now on salaries of €35,958.