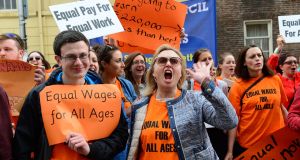 Teachers and INTO members at a rally for pay equality for lower paid teachers outside the Dáil in 2016. Photograph: Dara Mac Dónaill

There are few more controversial issues in education than pay for new entrant teachers – and a study to be published soon looks set to ignite it once again.

The Central Statistics Office has tracked college graduates’ earnings between 2010 and 2015.

The draft findings indicate that young teachers were among the top earners during this period.

A year after graduation, teachers earned more than any other group of graduates.

After five years they ranked second-highest, having been overtaken by computer, or ICT, graduates.

On the face of it, these relatively good starting salaries challenge teacher unions’ arguments that low pay has sharply reduced the attractiveness of teaching as a profession.

Crucially, however, the draft study in this case followed graduates from 2010 onwards.

This was prior to recession-era pay cuts, such as lower pay scales and the abolition of qualification allowances, which were introduced for new entrants to teaching.

Teachers’ unions estimate these reductions led to new-entrant pay being cut by more than 20 per cent.

In addition, they argue that most teachers are engaged in temporary, substitute or part-time teaching in Ireland. Such teachers, they say, experience income poverty, often struggling and sometimes failing to pay basic independent living expenses.

They only way of tackling this, they argue, is by restoring pay parity for the teaching profession.

On the other side of the fence, the Government argues it has made significant progress in relation to pay for newly qualified teachers.

An agreement concluded between Minister for Education Richard Bruton and the teachers’ unions last year included a 15-22 per cent increase in pay for newly qualified teachers. It argues that this has closed 75 per cent of the gap.

In January 2018, a newly qualified teacher straight out of college will earn €35,958, according to the Department of Education.

The remaining pay gap for newly qualified pay is being examined by the public sector pay commission.

However, unions, argue that controversy over two-tier payscales is casting a cloud over the profession, leading to teacher shortages and a reduction in students applying for key teacher-training courses.

For instance, they say applications for second-level post-graduate master’s teaching courses in publicly funded colleges have fallen by more than 60 per cent between 2011 and 2017.

However, the Department of Education says there is no issue with teacher shortages – apart from “pinch points” in key subjects.

It points to official figures which show that the overall numbers graduating from both primary and post-primary have remained relatively steady.

It says more than 5,000 permanent, full-time teachers have been hired over the past two years.