Teacher promotions to be awarded on merit for first time 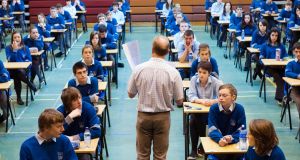 A moratorium on filling middle-management posts of responsibility in secondary schools has been the subject of regular criticism from unions over recent years. Photograph: Daragh McSweeney/Provision

Hundreds of posts of responsibility to be restored in second-level schools over the coming months will be awarded to teachers on the basis of their suitability rather than seniority, for the first time.

These posts – such as year heads or class tutors – typically involve responsibility for issues such as student attendance, pastoral support and monitoring, and student well-being.

Traditionally, these posts tended to be allocated to the longest-serving teachers in schools.

However, seniority will be phased out completely as a basis for selection within the next two years. Candidates will only be required to show their capacity to manage and lead a school.

While the move may not be welcomed by some older teachers, it will be well-received by younger and more ambitious teachers who have been hit hardest by austerity-era cuts.

Minister for Education Richard Bruton is expected to make an announcement soon on the change, which will be followed by a circular which will be sent to all secondary schools.

The Department of Education hopes changes in the way these posts are restored will contribute to a “distributed leadership” model in schools.

This involves moving away from a model of the principal as sole leader towards shared responsibility across the school for areas such as curriculum and learning, student support and wellbeing, and school improvement.

Well-placed education sources say that under a new circular, principals and schools will have much greater flexibility in relation to the assignment of roles for post-holders.

Schools which are eligible for promotional posts will be identified based on certain thresholds such as the number of students and existing post-holders.

While previously there was little official monitoring of post-holders’ activities, from now on they will be required to provide an annual report to school principals on their objectives for the year.

A moratorium on filling middle-management posts of responsibility in secondary schools has been the subject of regular criticism from unions over recent years.

The Association of Secondary Teachers Ireland (ASTI) has estimated that schools have lost an average of six middle-management posts since 2009.

This, they say, has undermined supports for students and put ever-greater workloads on principals.

While prior to the recession more than half of second-level teachers had some form of promotional post, this has fallen to about one in four teachers.

The move to restore middle-management posts is likely to see about one-in-three teachers in these posts.