Mary Harney appointed as chancellor of University of Limerick 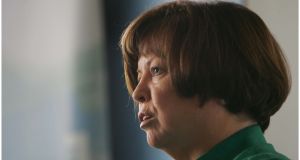 Former tánaiste Mary Harney has been appointed as chancellor of University of Limerick. Photograph: Bryan O’Brien

Former tánaiste Mary Harney has been appointed as chancellor of the University of Limerick.

Ms Harney, who retired from politics in 2011 and is now director of a number of private companies in the pharmaceutical, technology and finance sectors, will take up office as chancellor immediately.

The office of UL chancellor is honorary and Ms Harney’s tenure will extend to 2022. She will also chair the university’s governing body.

In a statement, Ms Harney said: “I am deeply honoured and delighted to have been appointed chancellor of the University of Limerick.

“UL is a nimble, responsive university at the forefront of innovation in pedagogy, delivering research with significant real world impact and yet has huge potential to grow and mature.

“I look forward to working with the president and the governing authority to develop further and enhance the education and research potential of this great university.”

The university was at the centre of controversy in recent years over allegations of misspending and poor human resources practices.

The college’s then chancellor, former chief justice John Murray, rejected calls by the Higher Education Authority (HEA) to establish an independent inquiry into allegations of misconduct at the college.

Dr Des Fitzgerald, who was appointed as the university’s new president last year, reversed this position and said an independent review was warranted, while he introduced changes to the college’s management and governance structures.

A subsequent report criticised the university’s handling of some of the allegations.

In a statement, Dr Fitzgerald welcomed the new appointment,which he said would allow the university to draw on Ms Harney’s “extensive experience as a leader and as an eminent public figure in Ireland and internationally.

“Mary has always been a pioneer in her field and a mould breaker in her political and public life,” he said.

“I look forward to her bringing that same pioneering spirit to UL’s new governing authority at a time of change and renewed ambition for this great institution.”

Ms Harney, a former student of Trinity College Dublin, served as tánaiste for nine years and became the first woman to lead a political party - the Progressive Democrats - in Ireland. She also held ministerial portfolios in environment, enterprise and health.