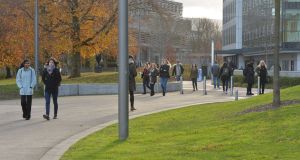 A €300 million on-campus accommodation complex at University College Dublin (UCD) has become the first development approved by An Bord Pleanála under the new “fast-track” planning process.

However the board has reduced the amount of student housing sought by the State’s largest university by more than a quarter, bringing the number of beds down from 3,006 to 2,178.

UCD was granted permission for the development, its largest single student housing scheme to date, in just over three months using the new Strategic Housing Development system. This allows applications for schemes of more than 100 homes, or blocks of 200 student bed spaces, to be made directly to An Bord Pleanála, bypassing the local authority decision phase.

While reduced in size, the new development will increase the student population living on the Belfield campus substantially, bringing the number of bed spaces from 3,179 to 5,357.

However the board ruled that the largest of the residential blocks, which involved the construction of three separate buildings, up to 10 storeys tall with 828 apartments, must be omitted.

The block would have been adjacent to the protected structures of Roebuck Castle and Roebuck Glebe and close to the site boundary at Roebuck Road, a residential area. This block would “adversely affect the character and setting of the protected structures”, the board said. It would also have a “significant adverse impact on visual and residential amenities” of Roebuck Road and would be “contrary to the proper planning and sustainable development of the area”.

A spokeswoman for UCD said it was “very pleased” by the board’s decision, and would be seeking tenders to start construction shortly.

While more time was needed to study the decision, she said the university was not precluded from making another application for the Roebuck Road lands in the future.

Almost one-quarter of students attending UCD will have access to on-campus housing once the new apartments have been built.