Arts graduates earn less than any other group after college 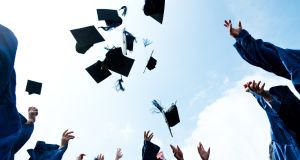 On average, arts graduates’ pay rose almost 70% over the five-years of the study.

Arts and humanities students earned less than other groups of graduates for up to five years following college, according to the draft findings of a major new study.

The Central Statistics Office (CSO) is due to publish research shortly which tracked graduates’ weekly earnings across different fields of study between 2010 and 2015. The draft findings show that arts graduates earned the least in their first year after college (€310 per week).

Three years following graduation, they remained at the bottom of the earnings league table (€420 per week).

After five years they still earned less than other graduates (€525 per week), though they were closing the gap on other groups as their earnings climbed higher than most other groups.

On average, arts graduates’ weekly pay rose by almost 70 per cent over the five-year period of the study.

After five years, the next lowest-earning graduates were those in services-related courses (€550 per week), followed by social sciences/journalism and agriculture/forestry/veterinary (€560).

The highest earning graduates after five years were in computer or ICT courses (€775 per week), followed by education (€735) and health and welfare (€705).

A spokeswoman for the CSO declined to comment on the findings on the basis that they were still being validated and subject to revision. They are due to be published towards the end of this month.

Some universities have responded to concerns over the employment rates for arts graduates by shaking up their offerings, with a greater emphasis on employment opportunities through internships, research or study abroad options.