Teacher shortages are most acute in subjects Irish, French and German, say unions 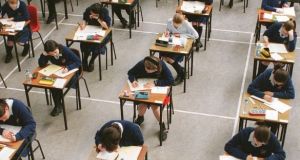 The State Examinations Commission needs to hire about 3,000 qualified teachers to assist in the delivery of State oral and practical exams this year. Photograph: Peter Thursfield

The commission has made a direct appeal to school principals to encourage teachers to apply to work as examiners for the oral exams which take place  over a fortnight in April.

Among the subjects where teacher shortages are most acute include Irish, French and German.

The commission needs to hire about 3,000 qualified teachers to assist in the delivery of State oral and practical exams this year, and teacher unions say it will face “extreme difficulty” meeting this target.

Some school authorities have privately acknowledged they are reluctant to release teachers to work as examiners due to an acute lack of subject-specific substitute cover.

A spokesman for the commission said it was not possible to provide details of the numbers of applicants at this stage, but said recent years have been characterised by a shortage of applicants.

He said the commission has previously taken steps such as accepting applications beyond the published closing dates and has made supplementary appeals to school authorities to release staff for the oral and practical examinations.

The Teachers’ Union of Ireland (TUI) said shortages of teachers in languages were now “worse than ever”and reaching crisis point.

John MacGabhann, the TUI’s general secretary, said many schools have tried to advertise for qualified Irish teachers this year but but have not been able to fill them with qualified staff.

“If a school releases an Irish teacher for the exams, almost inevitably they won’t be in a position to provide a like-for-like service due to the shortage of qualified substitutes,” he said.

A survey by the  Association of Community and Comprehensive Schools for the current academic year found that schools have experienced major difficulties finding qualified language recruits to fill “regular part-time” vacancies.

In the case of Irish, most vacancies were filled with teachers who were not qualified to teach the language (62 per cent), while a minority were qualified (28 per cent). The remainder were left unfilled (10 per cent).

The Association of Secondary Teachers Ireland (ASTI) also said there were genuine concerns over the supply of teachers for the oral exams.

“We had problems last year when the commission was looking for examiners and we expect those to mount again this year,” said Moira Leydon, assistant general secretary.

A commission spokesman said it hoped school principals would facilitate the release of teachers from schools.

“The response to our appeals in the past has been generous and the high level of goodwill and co-operation received from school authorities and teachers has always enabled the tests to be conducted as scheduled,” the spokesman said.

“We hope that, with the continued co-operation of all of the stakeholders, the coming year will be no different.”

Clive Byrne, the association’s director, said: “It is important for teachers for professional development reasons to get involved with the State exams in oral and practical areas – my only caveat is the ability of schools to find suitable substitutes while they are released to work with the exams commission.”