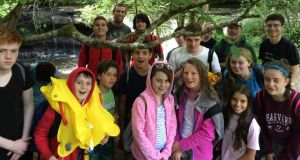 Connemara Maths Academy, in Delphi Resort on the Wild Atlantic Way, attract children from all over the world.

Summer is coming and, with it, parents will scramble to find ways to keep the kids busy. Increasingly, parents don’t just want the children out of their hair (there’s no hairbrush big enough for a start), they also want them to learn something useful.

We took a look at some of the best science, engineering, technology and maths summer camps and festivals for children and young people.

But why? And why? But why is that? Some inquiring children go on to become scientists and engineers, while this one went on to be a nosy parker journalist advocating that other children should never shut up with all the questions.

Designer Minds is aimed at children who love playing with technology, learning about nature and experimenting with science. The summer camps teach children about STEM by giving them hands-on challenges or experiments. There’s no tests or exams: it’s all about fun. At the summer camps, kids get to make robots, rockets and roller coasters, create circuits, skyscrapers and slime, explore electronics, engineering and energy and learn about coding, computers and chemistry. Oh, and Lego. Lots of Lego.

Following successful camps in Munster last year, this year’s Designer Minds will run in 17 counties nationwide. Junior camp groups are for children aged seven to nine, while 10-13 year olds can attend the senior camps. They run from 10am-2pm and cost €125 for five days.

And speaking of Lego . . . To date, more than 68,000 young children have attended LearnIt Lego camps. Available in 12 counties including Clare, Cork, Dublin, Kilkenny, Limerick, Tipperary and Westmeath, these camps are aimed at encouraging and inspiring the next generation of engineers, with children learning about construction, creativity, engineering, mechanics, science and robotics through hands-on learning.

There’s a few options available. The senior engineers camp is for children aged nine to 12 and it introduces young people to the world of mechanical engineering through real-world activities, with students working in teams of two or three throughout the week. The Lego-based junior robotics camp covers kids from eight to 11 and uses Lego to build robotic models with working motors, gears, cameras and sensors. The senior robotics camp, for those who are 11 years or older, combines Lego building with software to design, program and control robots.

This long-running tech camp is held at UCD, DCU, CIT, UL and NUI Galway and covers topics including web design, app development, game-making, 3D design, graphic design and animation. The camps are designed for children of all abilities and mix tech with indoor and outdoor sports and activities.

There’s also residential camps for 13-17 year olds, and may be of particular interest to young people who are interested in studying IT. Classes run until 3.30pm with leisure activities in the evening and dinner at 6pm.

This organisation is running two one-day workshops where young people get a chance to do hands-on science experiments. On June 1st, there’s an engineering workshop and on June 5th, a CSI/ forensics workshop. The day runs from 9.30am-1.30pm and costs €38, although there’s a pre and after-care option for 9am-2.20pm costing €45. The workshops are held in Newcastle, Co Wicklow.

Anyone4Science will also run a number of five-day summer camps in venues across Ireland from June 11th-August 17th, all running from 10am-2pm. Aimed at children aged five to 12, kids at the camps will investigate bubbles, geology, marine biology and more. The cost is €157.50 per child but multiple booking discounts apply.

The spectacular surrounds of Delphi Resort on the Wild Atlantic Way is the setting for this innovative camp from the CMA, with another being held at Rockwell College in Tipperary.

Delphi will be familiar to generations of students who went to its renowned adventure centre (as well as to the adults who snuck off to its luxurious spa hotel), while Rockwell is located in the world-famous town of Cashel.

Both camps attract children from all over the world, giving young people an international experience as well as an exciting encounter with STEM. Last year, about half of the attendees came from the UK, China, Europe, the US, the Middle East and South America, with the other half coming from Ireland.

The Delphi camps run from July 1st-7th, 8th-14th, 15th-21st and 22nd-28th. The Delphi residential camp, aimed at nine to 17 year olds, has a range of activities including surfing, swimming, kayaking, rock climbing, abseiling, raft building, coding, team sports, music technology, robotics, STEM workshops, sound production, VR and holograms, 3D modelling and printing, and much more. Many of the sports activities have elements of STEM woven into them.

The Rockwell camps run from June 24th-30th for ages 11-17 and July 29th-August 4th for ages eight to 15 and have a slightly different focus, with kayaking, swimming, zip wire and assault course, golf, music technology, STEM workshops, film production, sound production, robotics and drone design and construction on the agenda.

Both camps are residential and they cost €850.

The camps are held in locations throughout Dublin as well as in Dunboyne, Naas and Greystones.

Students will get to make slime and, in the process, learn about long-chain polymerisation, Newtonian and non-Newtonian fluids. There’s also smoke cannons (teaching about force and vectors), model gliders (teaching about the principles of flight), elephant toothpaste (learning about hydrogen peroxide and potassium iodide chemical reactions) and a dinosaur dig where children can make their own fossils. On top of this, there’s maths magic, magnetic fun, making your own compass and lava lamps, mountains, volcanoes and much more.

Children are separated into “atoms” for ages six to eight and “molecules” for ages nine to 11 but they will be in the same room together for most experiments and tasks.

Week-long summer camps cost €145 per child with a 5 per cent discount for siblings.

IT Blanchardstown in west Dublin is running three summer camps.

This includes a free coding camp for second-level female students on June 8th. No previous coding experience is required, and tailored coaching, training and guidance will be provided at the event on the ITB campus. Places are limited to 40 students. Students will receive a goody bag upon arrival and will be broken into teams to tackle coding activities, puzzles and other challenges. Free lunch and snacks will be available.

A free two-day cyber security camp will run on June 13th and 14th from 10am-3pm, with cyber coaches on hand to help students who will work in teams on the internet with activities and puzzles as well as a number of online cyber challenges.

Free lunch is provided at both camps.

For more information on these events, see itb.ie

Have I missed your STEM club? Tweet me @PeterMcGuireIE with the hashtag #STEMSummerCamps and I’ll tweet out the details for you.

Don’t miss: The Festival of Curiosity

Running over three days and nights at 14 venues around Dublin from July 19th to 22nd, this is an imaginative, engaging, family-friendly festival offering “playful days and curious nights” for people of all ages. The festival covers science, art, design and technology.

This long-running club is geared towards young people with a particular interest in STEM.

“If you’re interested in art, sport, cooking or dance, there are many opportunities for you to explore it,” says Arlene O’Neill, an assistant professor at the school of physics at Trinity College. “We saw that there wasn’t the same chance for students who were excited by STEM, and that’s where the Trinity Walton Club came from.”

Trinity Walton Club has two strands. One is a club which runs for 100 weeks and, because it is oversubscribed, requires applicants to sit an entrance exam. The second strand is a summer camp which typically runs from 10am-4pm every day and is for students who are about to go into second year through to those who are about to enter sixth year of secondary school.

“The programme runs for five days from 10am-4pm and is similar to the club, with the students taking on physics, maths, technology and engineering projects throughout the summer,” says O’Neill. “The camps are subsidised and cost €225, while we offer 15 per cent of places as scholarships for students in DEIS [disadvantaged] schools or on Trinity Access Programme affiliated schools.”

Things are looking up again: Spectacular supermoon due in Irish skies