One week on from Dundalk blaze, pupils settle into new third-level home

‘It’s raising their aspirations. Many are from families where there isn’t history of third level’ 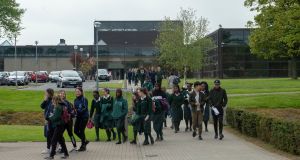 St Louis’s secondary students pictured on the Dundalk IT campus where they will complete the school year after their school was damaged in a fire. Photograph: Ciara Wilkinson.

A little over a week ago, much of St Louis’s secondary school in Co Louth was engulfed in flames, just weeks before the State exams. Today, its 500 students are adjusting to a gleaming new temporary home at Dundalk Institute of Technology.

It has been a week, say teachers, where the entire community has rallied around to provide a safe and calm learning environment in the run-up to the exams.

The relocation to a third-level institution, meanwhile, has brought unexpected benefits for pupils.

“The students have never seen anything like it,”says Michelle Dolan, the school’s acting principal. “They’re getting a sense of what third-level is all about. It’s raising their aspirations. Many are from families where there isn’t a history of third level. They’re seeing the facilities, spotting past pupils studying engineering or nursing. They can now see the opportunities in their own town.”

A week or so ago, Dolan arrived at the scene of the fire in the early hours of Saturday morning.

“There were four or five fire brigades – it was an inferno,” she recalls. “We were concerned that the whole school would go, but the firefighters were amazing.

“When teachers arrived later, many were crying. There was a lot of emotion. Many are past-pupils and are very attached to the school.”

The main building was saved, she says, but the grounds and classrooms were deemed unsuitable due to to fire damage and broken glass.

Within hours, she says, officials from from the school management body, the Department of Education’s building unit and Bus Éireann were on hand to help.

An offer to use Dundalk Institute of Technology’s premises arrived via its president, Dr Michael Mulvey.

“These were people who weren’t on duty, but they all rolled in. It was incredible. They all wanted to do what they could,” she says.

An immediate priority was to to get exam-year students back into the classroom.

There were also worries for technology students , whose Leaving Cert projects had been destroyed in the fire.

State Examinations Commission officials were quickly able to reassure the school that digital evidence could be included for the purposes of the exam.

The neighbouring school, De La Salle, offered to host students who were due to compete oral exams on the Monday; St Mary’s College – the Marist – volunteered to take students for supervised study in the evenings.

Dundalk Institute of Technology, meanwhile, was able to offer key buildings for use because its students were in the middle of their exams.

“It’s a big campus and the students need to be supervised at all times and teachers are working way over their normal hours to help; they love the school and they want the students to succeed,” Dolan says.

Plans are being drawn up with the Department of Education to repair the school and replace lost rooms, meanwhile. Teachers hope to return to St Louis’s by August.

“It has worked out very well thanks to a community effort,” says Dolan. “Our school motto is ‘Ut Sint Unum’ or ‘We Are One’. We have certainly felt the amazing power of teamwork and mutual support.”