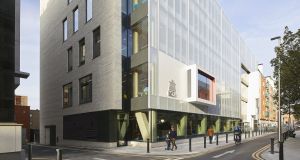 The Royal College Surgeons in Ireland’s new medical education building on York Street. The college is planning to create a new “university quarter” for the area

The Royal Colleges of Surgeons Ireland in (RCSI) is planning to create a “university quarter” facing St Stephen’s Green in Dublin as part of major expansion plans over the coming years.

The college, founded by Royal Charter in 1784, owns several properties on the west side of the green as far as the junction with Cuffe Street and to the rear of the Unitarian Church.

Prof Cathal Kelly, RCSI’s chief executive, said it was designing the first phase of an evolving university quarter for the area.

“We think it will bring vibrancy and life and a campus community to this part of St Stephen’s Green. We’re very hopeful that Dublin City Council will support us in this aspiration.”

The college, which has about 3,500 students and trainees, is planning to expand. “We will use the buildings to increase activity in the institute of leadership, we will use it to address research needs and expand our growth in other schools – physiotherapy, pharmacy, physician associates – and possibility medicine as well,” Prof Kelly said.

RCSI recently built a €80 million medical education building on York Street which it says offers students the most advanced facilities in Europe.

Prof Kelly said further investment will not involve any public expenditure, though he hoped it would attract Government support.

The college also wants to be granted university status to help boost its chances of attracting top international researchers, students and investment.

The use of the term “university” is carefully controlled under the Universities Act 1997, which sets out the legal and regulatory framework for the sector.

Key obstacles to RCSI being recognised as a university are understood to include governance arrangements, the fact that it exists outside public sector pay controls and the passage of technological university legislation.

While the college has been allowed to use the term “university” outside the State – under an amendment made in 2015 – Prof Kelly said the college has opted not to do so as it could leave it open to accusations of misrepresentation.

“We’ve a problem and a concern about a student leaving Malaysia or the Middle East, coming to RCSI ‘university of medicine and health sciences’. And the moment they come into Irish airspace, the name changes,” he said.

“We think it lacks integrity. We would very much value a dialogue with the Government to address.”

“I think it’s win-win. Our request comes at no cost to the Irish Government. We’re the only higher education institution who is a net contributor to the economy. The Irish Government doesn’t pay any of our salaries. None of our staff has a defined benefit pension scheme. We pay our own defined contribution scheme. We are responsible for our own capital investment,” he said.

RCSI is a constituent college of the National University of Ireland and has the power to award its own degrees . It was ranked in the top 2 per cent of universities worldwide in the 2018 Times Higher Education world university rankings.

Prof Kelly said that under its new strategy, RCSI aimed to secure a place in the top 1 per cent.

“These days we’re all wearing the green jersey and want to build the reputation of Irish education internationally... that is why we should celebrate Trinity’s achievement of being the only Irish institution in the top 1 per cent,” he said.

“And I am determined, along with my colleagues, that we will deliver for Ireland a second institution in the top 1 per cent – a specialist institution. I would like government support in doing that.”