Concern over males failing to progress studying computers and construction 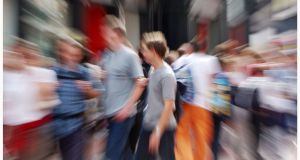 The proportion of students who did not complete their first year varied significantly across different sectors. Photograph: Alan Betson/The Irish Times

Students from disadvantaged schools are almost twice as likely to fail to make it past their first year in college than those from fee-paying schools, a new study finds.

In all, some 5,800 students – or 14 per cent of all new entrants to third level – did not move on to their second year of their course.

The research by the Higher Education Authority shows almost one-in-five students (19 per cent) from Deis or disadvantaged schools did not progress beyond first year. This compared to 10 per cent of students from fee-paying schools.

These figures relate to students who began college in the 2014/15 academic year.

Overall, a student’s Leaving Cert points are the strongest predictor of their performance in college.

Students entering with lower points are much more likely to drop out or fail to complete their course compared to those with higher points.

The findings are likely to reignite a debate about whether too many students who are ill-equipped to cope with the academic demands are moving on to higher education.

Ireland sends more students to third level than any other country in Europe, which is seen as a badge of honour by most policymakers.

However, some commentators feel more students should be encouraged to explore alternative options such as apprenticeships.

The profile of student most likely to progress is a female studying education or healthcare in a university or college, with relatively high Leaving Cert points.

The student most likely not to drop out is male, with relatively low Leaving Cert points, studying a level six (advance certificate) or level seven (ordinary degree) course at an institute of technology in computer science, construction or engineering.

In total, the study tracked 41,441 new entrants to higher education. The non-progression rate (14 per cent) was a slight improvement on the previous year’s figure (15 per cent).

The numbers who fail to make it to their second year of study vary across different fields of study. Construction and related programmes had the highest non-progression rate (23 per cent). However, this is down five percentage points from the previous years.

Medicine, by contrast, had the lowest non-progression rate of all new entrants in profession-oriented courses (2 per cent) while architecture had the highest (20 per cent).

The proportion of students who did not complete their first year varied significantly across different sectors.

Highest rates were recorded in diploma (27 per cent) and ordinary degrees (25 per cent) in institutes of technology.

This compared to lower rates in honours degree courses at institutes of technology (15 per cent), universities (10 per cent) and smaller colleges (8 per cent).

However, he said high non-progression rates on some diploma and honours degree courses in computing, engineering and construction remain a worry.

“The majority of these students are male. They may learn in a different way and I am glad that the new apprenticeships model is responding to that way of learning,” he said.

While rates of non-progression are generally higher in institutes of technology (IoTs) than in universities, after controlling for factors – such as academic attainment of the student and socio-economic background – some IoTs performed better than universities.

Dr Love also said there needs to be adequate guidance and information at second level.

“There is a personal and financial cost to the individual student if he or she does not complete their college course; there is also a cost to the State. We need to ask if students are picking wrong courses and how can we help ensure that they make the right choice,” said Dr Love.

On the issue of equity, Dr Love said that while the education system was committed to access and to equality, it was clear that student from a financially better-off backgrounds had advantages over those from less well-off backgrounds.