Think before you ‘fire out’ messages online, says President 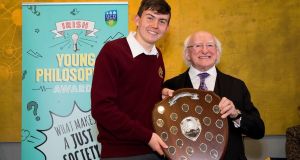 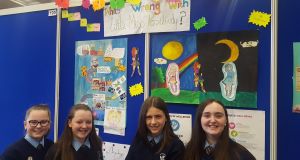 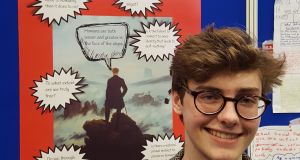 ‘The only way I can judge we can have a purpose is by contributing to humanity’: Fintan Smith from Coláiste Bhríde in Carnew, Co Wicklow.

President Michael D Higgins has called for a deeper ethical reflection within schools , saying it was “incredibly important” to examine how online activity was affecting young people.

“An anonymous message can be an instrument of hurt, death, it can wound; people have committed suicide by the consequences of people firing out a message for which you take no responsibility.”

He was addressing students on Friday at the first Irish Young Philosopher Awards at University College Dublin, which has been set up along the lines of the BT Young Scientist exhibition to explore moral, metaphysical and other fundamental questions.

Mr Higgins encouraged students to put the “great and wonderful capacities” emerging from technology “into a usage that is responsible... in a context of care and love”.

“Studying philosophy enables one to live with full capacity in solidarity and in cohesion with others, and that is just so very, very important,” he said.

He called for the teaching of philosophy to be extended in schools, adding: “Every subject that a university advertises itself will gain from its being integrated with philosophy.”

Close to 200 projects were submitted for the inaugural awards, according to UCD lecturer Dr Áine Mahon, one of the event organisers.

The competition, which was launched at Áras an Úachtaráin last November, encourages pupils at primary and secondary level to develop philosophical ideas through classroom discussions using different forms of media. Projects were showcased at Friday’s event at UCD O’Reilly Hall.

The overall award went to Luke Rickard (16), a fourth year student at Gonzaga College Dublin, for his project titled “Is it ethical for robots to be caregivers?”

Explaining the entry, he said he researched the growing need for caregivers with an ageing population and concluded “we should have half-half” provision between robotic and human care.

“Robots are fine for feeding pills or making sure people are safe or don’t fall but human touch is very important,” he said. “Robots cannot connect with people in the same way as human caregivers.”

Other exhibits explored such profound questions as “Are we free?”, “Does happiness exist?” and “If there is an afterlife, is life meaningless?”

A group of first year students from St Dominic’s College, Ballyfermot had a psychological slant in their project “What’s wrong with Little Miss Positivity?”, which explored the merits of the new Junior Cycle Wellbeing programme.

“A lot of positivity can be classed as fake positivity”, said Sophie Burke.

The group stressed they were not promoting negativity but rather a more complex condition characterised by “Little Miss Wellbeing”.

Fintan Smith from Coláiste Bhríde in Carnew, Co Wicklow entered an essay on the meaning of life.

A son of the artist and Aosdána member John Noel Smith, he said “at the dinner table at home we discussed philosophical questions from a very early age” so he didn’t think twice about name-dropping the 19th century Danish philosopher Søren Kierkegaard in his conversation.

“Kierkegaard said ‘I must find a truth to live and die for’. I relate that to my project on how to find meaning. How does one regain meaning when it is temporarily lost?

“The only way I can judge we can have a purpose is by contributing to humanity… I cannot see any other thing that could be a purpose. That is an argument; it is not necessarily the truth,” he added humbly.

Mr Higgins described the questions asked by the participants as “absolutely fundamental”.

“These are the questions that are behind good decision making at the United Nations, good decisions with relation to the European Union, to ourselves.

“I’m convinced that you’re going to see all of the subjects that are now on the curriculum being recast in the next few decades that are to come, and you will be so, so much better empowered because you are studying philosophy and asking questions.”

Speaking afterwards, Mr Higgins further praised the schools and teachers involved with this year’s projects. “It’s a great, great start to what I hope will be something that will be as big as the Young Scientist in the end.”