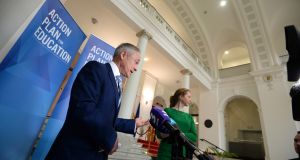 The Department of Education has confirmed it is to recommend that a new primary school to open in September 2019 to serve the Drumcondra, Marino and Dublin 1 school planning area should be a Gaelscoil under the patronage of An Foras Pátrúnachta.

A bid for a multi-denominational Irish-medium school in the area was turned down in 2016 despite the fact that the parents of 361 students from the immediate area had demonstrated their preference that Irish-medium education be available to them.

The decision prompted a series of complaints by members of the public to the office of An Coimisinéir Teanga (Irish language Ombudsman) which subsequently opened an investigation into the approach used to appoint a patron.

The investigation found that language provisions of the Education Act relating to the language and cultural needs of students, along with parental choice, had not been fulfilled by the department in the process to appoint a patron.

Irish-medium schools tend to be oversubscribed and students often end up having to travel greater distances to schools located in other districts or are forced to attend English-medium schools when the option of education through the Irish language is not available to them.

The original application for the Gaelscoil the proposed patronage body, An Foras Pátrúnachta, had submitted 733 names of children from within the catchment and adjacent areas - a record-breaking number in the history of the Gaelscoil movement.

Campaigners say the school selection process is stacked against those who wish to have their children educated through the medium of Irish and said the decision to turn down the Marino application highlighted the flaws of inequitable selection criteria.

In answer to a query from The Irish Times on Wednesday, the Department of Education confirmed it would be recommending that a new school due to open next year in the Drumcondra and Marino area next year “would be established as a Gaelscoil under the patronage of An Foras Pátrúnachta”.

Referencing a report to Minister for Education Richard Bruton by the NESG in 2016 which noted “the strong level of demand” for Irish-medium education in the Drumcondra, Marino, Dublin 1 area, the Department of Education said:

“In this regard, following completion of nationwide demographic exercises, on 12 April 2018, the Minister announced the establishment of 42 new schools from 2019 -2022, including a new primary school to open in September 2019 to serve the Drumcondra, Marino, Dublin 1 school planning area.

“In the context of the NSEG report, and given the strong level of parental demand for a Gaelscoil in the area evidenced as part of the 2016 patronage process, it would be recommended that this would be established as a Gaelscoil under the patronage of An Foras Pátrúnachta.”

An Foras Pátrúnachta has welcomed the development.

“This is very positive news for families throughout this area, and we look forward to making the arrangements to get the school up and running as soon as possible,” said Caoimhín Ó hEaghra, árd-rúnaí of An Foras Pátrúnachta.