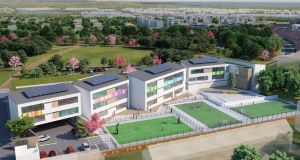 With a decision on the apartments imminent it has now lodged plans for the first of six schools.

Plans have been submitted for the first school in the new south Dublin town of Cherrywood, where almost 8,000 homes are due to be built over the next decade.

US developer Hines has lodged the application with Dún Laoghaire Rathdown County Council for the 700-pupil primary school ahead of a decision, expected in the coming weeks, on the development of the first large-scale apartment scheme in the Cherrywood strategic development zone (SDZ).

About 400 acres of land straddling both sites of the M50 at Cherrywood, south of Loughlinstown, were designated a SDZ by the Government in 2010, allowing the council to grant planning permission to landowners which cannot be appealed to An Bord Pleanála.

The planning scheme for the land was finally approved in 2014 but, despite there being 10 different landowners with sites in the zone, development has been extremely slow with the first applications only made to the council in the latter half of last year.

Hines, the largest landowner in the zone, earlier this year sought permission for the construction of a €450 million scheme of 1,269 “build-to-rent” apartments, along with street-level shops and cafes in the new town centre.

With a decision on the apartments imminent it has now lodged plans for the first of six schools. Once planning is granted, the development phase for the school, including the procurement of a contractor will be overseen by the Department of Education, Hines said.

The 24-classroom school will be situated directly south-west of the new 22-acre Tully Park, one of three large parks planned for the area.