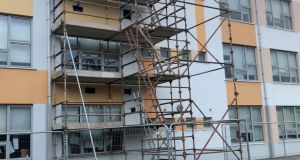 Scaffolding at Tyrrelstown Educate Together School in Dublin which has been closed amid concerns over “significant structural issues”. Photograph: Cate McCurry/PA

Inspectors have found structural issues in two further schools constructed by Western Building Systems (WBS), the developer at the centre of controversy over school building standards.

Officials from the Department of Education started examining ten schools on Friday. Five of these schools have now been cleared to reopen fully after the midterm break on November 5th.

However one of these schools, Scoil Chaitlín Maude in Dublin 24, will require intervention in the form of a protective fence and protective decking after structural issues were found in the exterior. This work will be completed during the mid-term break, the department said on Saturday.

Inspectors found structural issues with both the exterior and interior of Gaelscoil Eiscir Riada, a 16 classroom school in Lucan with 454 pupils. Only the ground floor will reopen after the break while work continues on the rest of the building. The Department has said it is working to host the remaining classes at an off-site location “with a view to ensuring that all classes can be accommodated when the school reopens on the 5th of November.”

Inspections are continuing this weekend at another four schools and the Department will provide an update on Sunday.

The schools cleared to fully reopen are:

The Department is to inspect about 40 schools around the country before the end of the mid-term break, all of which were constructed by WBS, a Tyrone based company.

Concerns first arose over schools built by WBS in 2015 when fire safety defects were uncovered.

One inspection of a school in north Dublin found there was an 80 per cent chance of an external wall falling outwards in the case of structural failure in storm force winds.

Minister for Education Joe McHugh said the finding was an example of the kind of potential risks facing students and staff in schools, which are the subject of structural safety checks.

This week WBS released a statement insisting the Department of Education had signed off on each project.

It said “certificates of completion” show each of the buildings was certified by representatives acting on behalf of the then minister for education.

All three were ordered to close this week following structural safety concerns.