‘Race against time’ to conduct safety checks of 40 schools 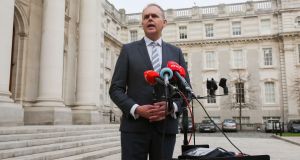 Minister for Education and Skills, Joe McHugh, speaking to media on the recent school closures in the Courtyard at Government Buildings, Dublin. Photograph: Gareth Chaney Collins

Education authorities are facing a “race against time” to complete structural assessments for 40 schools during next week’s mid-term break.

Department of Education officials are planning to work around the clock over the coming days in the hope that schools and parents will have certainty over whether their schools will re-open after the holiday.

All the schools were built by the Co Tyrone-based construction firm Western Building Systems (WBS).

Minister for Education Joe McHugh acknowledged the timeline was very tight, but said all available resources were being used to complete the safety checks.

He said there was no indication all 40 schools would close, although it was likely that the number with serious structural problems would grow.

Officials are also involved in an urgent search for temporary accommodation for students who are already affected by school closures.

Some 1,300 pupils may require temporary accommodation for up to a year or more after three school buildings were ordered to shut this week on foot of structural concerns.

Safety checks carried out on behalf of the Department of Education revealed a series of urgent structural concerns over Tyrrelstown Educate Together National School and St Luke’s National School, which share a campus in west Dublin.

A building at Ardgillan Community College in Balbriggan was also ordered to close this week. A check of a fourth school built by WBS last year in Firhouse, Dublin, on Wednesday did not reveal any significant issues.

While officials are hopeful of finding temporary accommodation for about 120 students in Balbriggan, the task of finding places for 1,200 children in Tyrrelstown is much more challenging.

Officials are examining options such as splitting up the schools so classes can use spare capacity across a number of secondary schools in the capital.

The potential for using prefabs is also being examined, though these require planning permission and a longer lead-in time.

Taoiseach Leo Varadkar acknowledged in the Dáil on Wednesday that it would be difficult to find other rooms for teachers and pupils affected by the closures but “everything will be done to find alternative accommodation nearby”.

Mr Varadkar said they had to put safety first, referring to the decision to close the three schools.

He was responding to questions from Fianna Fáil deputy leader Dara Calleary in the wake of a decision by the Department of Education to conduct structural examinations of dozens of schools built by WBS. Litigation against the company is under way in the case of four schools over fire safety issues.

It is unclear, however, whether the Department of Education will be in a position to pursue the company for potential costs linked to structural problems.

This is because the defects liability period is six years in some contracts, and 12 years in others.

This resulted in some schools being built within just three months. Stricter building regulations came into effect in 2014.

Mr Varadkar said structural issues highlighted so far have indicated that “while no imminent danger was identified”, they were being closed as a precautionary measure to allow further detailed investigations.

The Taoiseach said it would be a challenge to provide alternative accommodation for the pupils and teachers disrupted but “the target is to have interim accommodation available for when pupils return to school after the mid-term break”.