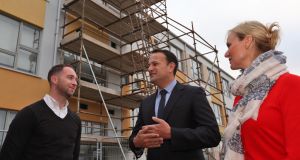 The Minister for Education Joe McHugh is unable to say how many other schools may have to close due to structural concerns.

The Department of Education was in contact with all 42 schools constructed by Western Building Systems (WBS) on Thursday which are due to undergo a structural assessment or safety check.

“The assessments are proceeding over the weekend and mid-term break in order to minimise disruption to schools and ensure that they can be completed as quickly as possible,” it said.

Speaking on RTÉ’s Drivetime Mr McHugh said they are in “the guesstimate territory” in terms of how many other schools may have to close.

To date three schools have been impacted by closures. These include Ardgillan Community College in Balbriggan, Tyrrelstown Educate Together National School and St Luke’s National School, Mulhuddart.

He said he was confident that all pupils in Ardgillan will be back at school from Monday week.

He said WBS are currently involved in building one permanent school and one temporary school for the department. There are “no issues” with the hospital buildings constructed by WBS, he added.

WBS has insisted that the Department of Education signed off on each project.In a statement, the firm said department contracts stipulated that the three schools should be completed within a timeframe of 20-26 weeks.

“We met these timelines as per our contractual obligations. The department itself deemed each project to be fully compliant, issuing the supporting certificates of completion,” it said.

It added that it wrote to the Minister for Education on Wednesday seeking an “urgent meeting”.

“We were subsequently contacted to meet with department representatives today. We welcome this development as it allows for a better understanding of why these three schools, previously deemed compliant by the department, have now been closed,” it said.

“Mindful of pupils, parents and teachers, we are determined to work with the Department to get to the bottom of this matter.”

However, the department has insisted that the contractor and its design team were “fully responsible for the construction and certification of the buildings” in accordance with the regulations in force at the time.

It said the role of department representatives during periodic site visits was as “client liaison”.

“This should not be construed as removing the responsibility from the contractor and its design teams for detailed quality control and certification of the buildings,” it said.

In the meantime, WBS says it is engaging in the assessment process for the three closed schools.

There was relief on Wednesday evening when the structural inspection of Gaelscoil Teach Giúise in Firhouse, Dublin – built last year – did not reveal any significant issues. This may suggest that schools built in more recent years were of a higher standard.

Most concern will now focus on the 30 or so schools built by WBS during the department’s “rapid-build” programme between 2007 and 2013.

The Government, meanwhile, is “working night and day” to establish the extent of structural risks in school buildings, the Taoiseach pledged as he visited one of the impacted sites.

Leo Varadkar said all the facts were still not known as he toured Tyrrelstown Educate Together School and St Luke’s on Thursday morning.

“This is a big problem, we don’t necessarily know the scale of it yet, but we do know that we will fix it, we are going to make sure that everything is put right,” said Mr Varadkar.

A search is currently under way to find temporary accommodation for the 1,200 students affected by the closure of two primary schools in Tyrrelstown, Dublin.

It is understood that Blanchardstown Further Education and Training has offered space to students, while officials are also examining the use of spare capacity in secondary schools. It is likely that pupils will be spread across a number of locations following the mid-term break.- Additional reporting: PA