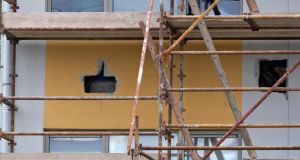 Scaffolding surrounding bore holes in Tyrrelstown Educate Together National School, which has closed its doors due to a structural defect. Photograph: Colin Keegan/Collins

Every morning, Olga Morgan, a stay-at-home mother of five, prepares her son Andy (6) for a taxi that takes him from their home in Clonee, Co Meath, to Tyrrelstown Educate Together National School.

Andy, who is non-verbal and attends a specialised autism unit at the school, relies on this routine.

He is also one of 1,200 pupils from the campus – shared with St Luke’s National School – displaced by the schools’ indefinite closing this week following structural assessment inspections carried out for the Department of Education.

When Andy’s taxi did not pick him up for school Wednesday morning, he began pacing up and down; ripping things; climbing; crying. “A total meltdown,” Morgan called it.

“He knows he should be in school,” she said. “I’m up the walls . . . My son could have a regression because of this.”

Morgan spends most days taking care of her adult son Anthony (26), who has Cerebral Palsy, but spent Wednesday morning struggling to contain Andy, who she says was “bouncing off the walls”.

Anthony even had to wait 40 minutes to use the bathroom while his mother corralled Andy.

With midterm break next week, Morgan has already been preparing for days at home taking care of Anthony, Andy, and her daughter Sophie (10).

Her main concern now is how long the school will be closed, and how it could negatively affect Andy’s education.

“With a child with autism, you have to accept a school that has a place available, where the waitlists can take years,” Morgan said. “You can cope for a day or two, but when you don’t know how long it’s going to be, it’s very difficult.”

Parents were on hand at the school Wednesday afternoon for an impromptu car-park meeting with Matthew Waine, a Solidarity councillor for the Mulhuddart Ward on Fingal County Council.

Waine has spoken to construction experts who suggest the building could be closed for months. If the schools have to relocate, he fears there is not nearby infrastructure in place to support an appropriate education environment.

“There’s a stony silence from everyone,” he said. “The department hasn’t really said anything. Schools haven’t said anything. What are you going to do with 1,200 students? Where are they going to go?”

Parents at the meeting were concerned that moving to a new school could throw off their work schedules, and expressed worry regarding the educational difficulties of changing schools and programmes.

“Even if they find another place for the kids to go – and I have a hard time believing they will – I’m worried it will be too far and won’t suit us,” said Giulia Romoli, a parent attending the meeting.

Charlie Cleary, a stay-at-home father of two whose sons attend Educate Together, was concerned about his sons assimilating to a new school environment with unfamiliar surroundings, teachers and students.

“This is an absolute, complete disaster,” he said. “The worst part is the kids will be separated throughout Dublin 15. They will be forced to blend in. My guess is a lot of kids will do it, more won’t be able to.”