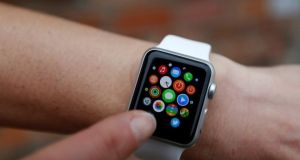 Most third-level institutions prohibit the use of Fitbits, Apple Watches and other devices which allow users to upload and access documents. Photograph: Lynne Cameron/PA Wire

Universities have recorded a sharp increase in the number of students wearing banned smartwatches in exam halls.

Most third-level institutions prohibit the use of Fitbits, Apple Watches and other devices which allow users to upload and access documents.

NUI Galway this year recorded an increase in the number of breaches of exam regulations, up from 56 last year to 83 so far this year. It said a key factor was the use of smartwatches.

Its penalties for breaches of exam regulations range from letters of reprimand to permanent exclusion from the university.

NUI Galway said it recorded a similar increase after it banned mobile phones several years ago.

Not all cases of students wearing smartwatches involve an intention to cheat, however.

The university said in some cases students reported the devices to invigilators prior to the exam. Nevertheless, all such cases were reported as exam breaches.

Trinity College Dublin, which also bans the use of smartwatches, recorded a total of 42 breaches of exam regulations this year, along with 10 incidents of cheating.

It did not provide a breakdown, but one source said use of smartwatches is becoming a significant issue and is difficult to police in a crowded exam halls as they resemble regular watches.

This has prompted a number of UK colleges to introduce blanket bans on wristwatches of any kind.

City University in London, for example, now requires all students to remove their watches prior to exams and to place them in a bag.

Despite the advent of technology, old-fashioned approaches to cheating are still favoured by a very small minority of students.

Students have been penalised for smuggling notes into the exam or for writing on their sleeves or hands.

On a positive note, latest figures suggest cases of plagiarism seem to be on the decrease.

At Trinity, for example, the number of cases of plagiarism has halved year on year, down from 33 cases last year to 17 in the 2018/19 academic year.

Some say this is due to greater awareness on the part of students over sourcing and use of third-party material.