Quarter of Kerry schoolchildren in classes of more than 30 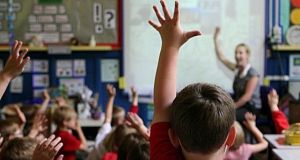 The Department of Education said the staffing schedule for the current school year at primary level was operating on a general average of 26 pupils for every teacher. File photograph: Getty

Almost a quarter of all primary schoolchildren in Kerry were taught in classes with more than 30 pupils last year.

Other counties with above-average levels of pupils in large classes were Limerick, Westmeath, Kilkenny and Carlow.

In contrast, only 16 per cent of pupils in Cavan and Roscommon were in classes with above the average number of children.

The new Department of Education figures show the number of students in classes of 25 or more across the country was more than 347,500, approximately 63 per cent of the total.

The data revealed that pupils in schools across most counties in Leinster were more likely to be in classes of 25 or more than pupils from other parts of the country.

Minister for Education Joe McHugh said budget 2019 would allow for the numbers employed in schools to reach their highest-ever level.

Mr McHugh said it was the third year of additional investment in education with the department’s budget increasing by 6.7 per cent or €674 million on 2018.

“Over 1,300 additional posts will be funded including more than 370 teaching posts to cater for growth in student population and additional special classes,” said Mr McHugh.

The department said the staffing schedule for the current school year at primary level was operating on a general average of 26 pupils for every teacher.

“The staffing schedule operates in a clear and transparent manner and treats all similar types of schools equally irrespective of location,” said a spokesman.

He added that the guidance issued to schools was to keep the number of pupils in any class “as low as possible”.

It is estimated that lowering the primary staffing level by one student per teacher would cost approximately €135 million per annum.

While welcoming a reduction in class sizes in recent years, the Irish National Teachers’ Organisation (INTO) said they remained “far too high” and called for the trend to be maintained until Irish levels reach the EU average class size of 20.

How did the INTO react?

“With only 11 per cent of Irish children learning in a class of fewer than 20 students – the EU average – it’s clear they are being short changed,” said an INTO spokesman.

“Smaller classes support inclusion and diversity of children and allow for more individual attention,” he added.

The INTO said falling numbers due to attend primary schools over coming years presented “an ideal opportunity” to further lower class sizes, “if we retain the number of teachers at the present level”.

Interdenominational and multidenominational schools have higher average class sizes, of 26.8 and 25.5 respectively, than Catholic schools and Church of Ireland schools, with 24.3 and 23.1.

Schools in disadvantaged areas schools, or Deis (Delivering Equality of Opportunity in Schools) schools, have an average class size of 21.3 pupils compared to 25.2 in non-Deis schools.

The largest primary school in the country is St Mary’s Parish School in Drogheda, Co Louth, which had 1,103 pupils enrolled last year in 40 different classes.

Data on fee-paying primary schools was not available.