Will CAO points for my course go up or down? Here’s our best guess 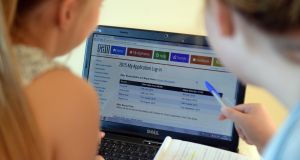 Latest data on first preferences shows where demand is up and down this year. Photograph: Cyril Byrne / The Irish Times

It’s the burning question occupying the minds of thousands of Leaving Cert students: will CAO points for my chosen course go up or down?

It is impossible to say for certain until the results are released at 2pm on Thursday.

But latest CAO first preference data gives an indication of where demand is up and down this year across categories of courses, such as arts, business or science.

This, in turn, influences whether points requirements are likely to rise, fall or stay the same.

Search your course in our database (below) of level eight courses  to see whether your chosen course is in a category where demand is up or down this year.

One important caveat to note: while demand is a strong indicator of whether points will rise or fall, there may be other unseen factors at play.

Whether colleges allocate more or fewer places on individual courses will influence the direction of points requirements; as will decisions on how many places they set aside for mature students and others.

In addition, the categories used by the CAO are quite broad and represent the average changes in preferences across sectors rather than individual courses.  So,  the figure you see here is the per centage change in first preferences for the category of course, rather than the course itself. In the meantime, here’s what we know from the latest data:

At level eight ( honours degree), the biggest surge in demand is in the area of humanities - excluding languages (+ 39 per cent), follwed by transport (+35 per cent), environment and languages (both + 24 per cent).

These courses are the most likely to see an increased in points, assuming additional places aren't added to these courses.

Other areas where there has been a significant, but more modest, increase in first preferences include:

Little or no change

There is little or no change in overall demand for other areas including:

Biological and related sciences (+6 per cent),education, law, ICT, welfare (+2 per cent), architecture and construction (+1 per cent). There has been no change in science.

The sharpest decrease in overall demand has been recorded in what is categorised as  journalism and information (-54 per cent), followed by interdisciplinary programmes and qualifications involving arts and humanities (-42 per cent).

There was also a significant decrease in interdisciplinary programmes and qualifications involving agriculture, forestry and veterinary (-17 per cent).

Smaller decreases were recorded in personal services (-6 per cent), veterinary (-5 per cent), arts, business (-4 per cent), health, hygiene and occupational health (-2 per cent).

The patterns in demand for first preferance courses are different for level six and seven courses (higher certificate and ordinary degrees).

For example, the biggest increases were for education (+71 per cent), humanities except languages (+64 per cent).

By contrast, the greatest decrease in demand were in areas such as social and behavioural sciences (-39 per cent) and transport services (-22 per cent).

In the meantime, if you need any help or guidance on the results and CAO offers process, The Irish Times will run an online helpdesk staffed by our team of qualified guidance counsellors.

It is due to operate from Tuesday 13th Augusut to Saturday 17th August can be accessed at: irishtimes.com/results2019