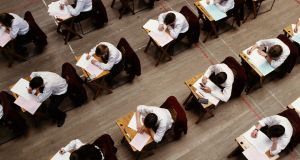 SEC insists shorter timeframe will ‘not impact the quality or accuracy’ of results .

Speeding up the correcting process for this year’s Leaving Cert means it is unlikely that all quality assurance measures will be completed on time, according to internal State Examinations Commission (SEC) records.

The results are being provided earlier than normal on foot of a High Court ruling last year which found that students should be able to take up a college place immediately if they successfully appeal their exam grades.

An internal record released under the Freedom of Information Act states that the SEC is doing its best to shorten appeal timelines in the interests of candidates, while continuing to provide a robust and quality appeals system.

However, the document goes on to state: “It was noted that this plan would very likely not be able to provide for the completion of all QA [quality assurance] exercises in time for the issue of the appeal outcomes, and that provision for this would need to be made in the concurrent planning with HE [higher education].”

This year, candidates will receive their Leaving Cert results a day earlier – on Tuesday, August 13th – while appeal results are due to be issued in mid-September, three weeks earlier than the previous timeframe.

In response to a query about quality assurance checks, the commission insisted that the changes being introduced this year will “not impact the quality or accuracy of that appeal process in any way”. It said the central pillars of the process – such as having the marking of all appealed scripts reviewed and remarked in full – remain unchanged.

However, it confirmed that some aspects of quality assurance in the process may not be ready in time for when the appeal results are due to issue in mid-September.

This relates to the rechecking of scripts by an individual examiner where there are concerns over the quality of correcting. As a result, there is a chance that some students could end up receiving unexpected upgrades – or, less likely, downgrades – after the mid-September deadline.

For example, last year some chemistry students who did not query their results received upgrades when the appeal results issued in October. This stemmed from a revision to marks awarded to an individual candidate, which triggered a wider look-back at other scripts marked by the same examiner.

In a statement, the commission said it uses the appeals process as a further quality assurance check on the processes underpinning the results in August.

“This can result in candidates who have not appealed a result receiving an upgrade. If, for example, concerns emerge during the appeals process about the quality of the work of an individual examiner during the original marking, this can lead to all of that examiner’s work being re-examined. This is a significant and time-consuming activity,” it said.

The SEC said that in previous years it was generally possible to conclude these quality assurance exercises and issue the outcomes to candidates at the same time as the appeal results.

“However, in light of the compressed timeframe for the operation of the Leaving Certificate appeals process in 2019, it is possible that this may not be the case, though it is expected that they would issue very shortly thereafter,” the commission said.

It added that the commission will “continue to operate these further quality assurance checks in 2019 in the interests of fairness and equity to all candidates”.

“The outcomes of such further quality assurance measures are reported to candidate’s schools and to the CAO.”