Employees are looking to companies for provision of workplace wellness initiatives 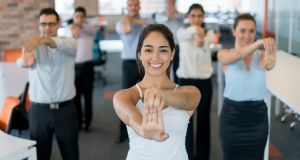 The country is almost at full employment, a talent war is raging and offering extra money is no longer the only way to retain staff or attract new recruits to an organisation.

Research by the Irish Business and Employers Confederation (Ibec) last year showed that six out of 10 employees were more likely to stay long-term with an employer that showed concern for them, while almost half of the 1,000 employees surveyed said they would leave a job where an employer did not care about their well-being.

“The composition of the workforce is changing – millennials make up its biggest proportion. Their needs and wants are vastly different from the baby boomers,” says Karen Hilliard, account manager with Ibec’s KeepWell Mark (a national workplace well-being accreditation from Ibec). “They want flexibility and to know they are cared about. They want to go in in the morning and know people will look after them.”

Wellness is moving centre stage in the modern workplace but it is a broad church: exercise classes; flexible working hours; free fruit; gym passes; talks on healthy eating; running and walking clubs; mental-health initiatives; a ban on emails after a certain hour; and putting protected disclosure policies in place all come under its wide umbrella.

Health and wellness consultant and founder of Office Worker Health Brian Crooke believes Ireland is “on the crest of a wave with workplace wellness”.

When a company gets in touch with him asking about implementing a wellness initiative, he always asks, why? For some, it’s because they understand the real value of it, for others, “it was because they had been interviewing a number of candidates and they all asked what their wellness programme was like. They weren’t able to offer them anything and I don’t think they heard back from those interviewees. It kind of feels like the interviewee is interviewing the company just as much as the other way around now,” Crooke says.

Employers are increasingly realising the benefits of wellness in the workplace, how it can help attract top talent along with making for happier, healthier staff, reducing absenteeism and boosting productivity. However, it seems Irish organisations still have some way to go to reach the standards set by multinational companies.

Crooke has a seven-step wellness process that he follows when working with organisations. It can take months to put a proper programme in place, but he finds that Irish companies often want to jump in at step number five – choosing an initiative to implement. This can often mean skipping the process of an audit to find out what the organisation and its employees really need, along with not getting buy-in from senior management, who are critical to leading by example.

“Not enough companies are going through the entire process. So they’ll run a six-week class or a series of talks. It’s very challenging to get a full year-long programme. The short-term vision is the big difference we have here compared to the US, where it is seen as a long-term strategic function. The role of the chief well-being officer is reasonably commonplace but that just doesn’t exist in Ireland, unfortunately.”

However Crooke, who recently held a standing-room-only event for the the inaugural meet-up of the Workplace Wellness Ireland community, is very excited about the direction the country is heading.

He takes much encouragement from the fact that one workplace well-being accreditation programme has already launched, with two more in the pipeline. Ibec began its KeepWell Mark last year, Great Place to Work will launch Healthy Place to Work in October while the Government’s Healthy Ireland body is working on a Healthy Workplace Initiative.

Ibec’s programme involves an audit, an on-site visit by an independent assessor, the organisation providing a clear roadmap for implementing and excelling across eight critical areas of health and well-being, along with proof that initiatives have been implemented.

“What we are looking for is that the foundations of the company are right, that they have the right ethos, the right polices in place. That things such as effective whistleblowing policies and flexible leave are communicated to staff. If there are patterns of absence in the company, that they are identified and as a management team you’re questioning, is there a problem there? Is there something we can do as an intervention? Are we calling out our endorsement of mental-health initiatives? It’s really about getting into practical communications rather than providing yoga classes and free-fruit Fridays,” says Anna Donegan, senior membership development executive with Ibec.

The Health Products Regulatory Authority (HPRA), a State agency that regulates medicines, medical devices and other health products has recently received Ibec’s KeepWell Mark. It had been running wellness programmes for many years before applying to take part in the Ibec programme, which it liked because of its holistic approach to mental health, health and safety, and leadership.

The HPRA has health and well-being steering committees made up of employees from across the organisation and conducts surveys throughout the year to see how people are feeling, how they found certain initiatives and if they want things changed or a focus put on a different area.

While it offers its 340 staff flexitime, healthy eating initiatives, organises running and walking groups, and holds lunchtime fitness classes – with all levels of staff participating and in many cases, leading the programmes – it also puts a huge emphasis on mental health.

A 2016 ESRI study found that the two largest categories of work-related illness reported by workers were musculoskeletal disorders and stress, anxiety and depression.

While the HPRA had various speakers on mental-health issues visit over the years, it is now involved in becoming a SeaChange partner in a bid to reduce the stigma attached to mental health in the workplace. One of the ways it is doing this is by training mental-health first-aiders whose names are listed next to the first-aid team and fire marshals in each department.

Managers have already been trained up and the HPRA will soon be rolling out the two-day training programme for all staff, which will help them identify if someone is in a crisis situation with mental health and be able to offer advice and point them in the right direction to get assistance.

“It’s so important to support people – it doesn’t matter whether it occurred here or at home – it’s really the impact, you can’t confine where it’s played out, it’s an area you can’t afford to ignore,” says HPRA director of human resources and change Lynsey Perdisatt.

“Our vision is to build a resilient workforce by empowering people to take healthy lifestyle choices . . . We don’t manufacture products, our products are our people who are our main resource. It’s imperative we invest in them.”