Free fruit and fitness classes: the hallmarks of the modern workplace 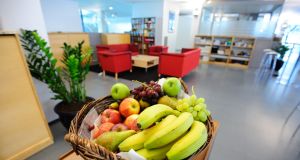 The provision of fruit, social zones and quiet spaces are becoming more common in the Irish workplace. Photograph: iStock

The workplace of yore can often conjure up grey images of dull cubicles, frayed plastic plants and thinking Dolly Parton was indeed very right when she said working nine to five was just all taking and no giving.

Fortunately, the modern office is now very much in technicolour, with less rigid hours and a greater emphasis on making it a place that is both pleasant and productive.

There are a number of features that are becoming the norm rather than the exception in today’s workplace. Everything from ergonomic furniture, quality air and lighting systems to daily fruit baskets, quiet zones, social spaces, flexible working arrangements and on-site wellness programmes are becoming a baseline in many offices.

With musculoskeletal disorders one of the main work-related illnesses reported by employees in a 2016 ESRI report, along with the news that sitting has become the new smoking, incorporating more movement into the day is becoming a key feature of the workplace. This isn’t just limited to providing sit-to-stand desks, which are becoming more and more popular, it’s also about creating flow in the office.

“The layout is probably something that employers are spending more time taking into consideration,” says Clare Kelly, director of Glandore, an Irish company that provides high-end serviced offices and co-working spaces to rent in Dublin, Cork and Belfast.

“There’s an appreciation now that sitting is a major health risk and can lead to obesity, diabetes, cancer etc. If you’re in an open-plan office, it’s about facilitating different spaces to do your job so you’re not just sitting at the same desk all the time.”

As such, social spaces and team break-out areas are becoming much more common, not only to help foster a sense of community but also to encourage people to have a change of scenery.

But while such areas are hugely beneficial to collaboration and communication, they are not ideal when it comes to focused work, with quiet zones just as necessary.

“Not everybody works well in an open-plan office. Depending on the role or requirements at different times of the month, it’s about having an environment where you can go into a zone and block out the external stimuli, where there is a dedicated focus suite, pod office or phone booth and you can take a couple of hours of quiet,” says Kelly.

With space at a premium, and more companies hotdesking, having such areas are a huge help in keeping business costs down without impacting on productivity, she adds.

While pods and social spaces are very welcome additions, there is also a growing appreciation among employers of the pace of modern life and that not all of the day’s working hours can be spent in the office.

“If employers want to have a diverse workforce then they have to support men and women and allow them to be flexible when they need to be. Nine to five is becoming less of a hard and fast rule,” says Kelly. “It’s far more about managing your workload and doing it in a way that works for the company while you keep a work-life balance.”

Technology is now playing a key role in making that happen.

“More companies are providing laptops, phones and tablets just to stay connected. That is a good and bad thing as it allows more flexibility in the way you work and allows you to move away from the desk, but it also means you’re ‘on’ for longer. So it’s about trying to find that balance. That is the challenge for employers now, not to encroach on that while at the same time giving employees the tools they need to be productive.”

Glandore not only provides office spaces but also on-site wellness programmes, which are increasingly becoming part of modern work culture.

“If you’ve got employees out sick and you’re doing nothing to prevent it, you know that is obviously going to impact on the bottom line. Companies are really starting to recognise that you need to look after employees and create a culture where you support them in looking after themselves,” says Kelly.

This can include giving “convenient access to health” such as providing employees with a dental check, vision assessment or a massage, as well as offering gym membership or exercise classes at lunchtime.

“It’s about giving employees the opportunity to focus on their health rather than 24/7 making it about work, and then when you go from there you’re thinking about family and other people. It’s about creating a culture where it is okay to take time out and focus on your own personal health.”

While international companies have certainly raised the expectations of what a modern office should look like, with beer taps sometimes found among the array of beverages on offer, Irish companies are holding their own in other ways, says Kelly. “People want to feel appreciated, cared for and respected by their employer. I think what Irish companies have done well is they look after their staff. There are certain things that are very important and that is having development, for graduates in particular. It’s about having a culture where mentoring and coaching and a supportive environment is very important. That’ll do more for their career than a ping-pong table in the corner of the office. A company is all about the culture.”