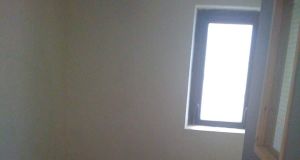 The isolation room used by a primary school for handing children with challenging behaviour, taken by a mother who says her boy was regularly placed there against his will.

Killian was about 11 years of age when he was placed in a small room with a single window and no furniture as a “last resort”, says his mother.

He had a diagnosis of autism and ADHD and was liable to have a meltdown if he became overwhelmed.

“We had no problem with it at the start,” she says. “Safety was paramount. They called it the ‘calm room’. . . but after a while it became a punishment room,” she says.

“Soon he was being put in there for trivial reasons such as not doing schoolwork quickly enough or talking in class,” says his mother.

“He had always loved school . . . but by the end of October in fifth class he hated it. I was dragging him into school every day.”

He said he didn’t want to go back because they’d lock him up. He was in a class with 30 kids, he couldn’t cope

He had previously received therapeutic intervention to help him cope with his condition in the mainstream primary school, but it was withdrawn in fifth class.

This, she feels, may have been a contributory factor in his behaviour, but she feels the use of the isolation room led to a dramatic change.

“He said he didn’t want to go back because they’d lock him up. He was in a class with 30 kids, he couldn’t cope, he wasn’t getting sensory breaks... He needed to be taken out of a class, but not locked in a room.”

Following the Christmas break, she hoped things would calm down. Instead, they escalated further.

“The room itself, based on her photos, is a small, cell-like room with a single rectangular widow and light.

In early January, she says he ended up being “locked” in the room for five hours.

The next day he was placed there again and ended up breaking the window. Gardaí were called and he was found, “shivering, with no shoes or socks, with broken glass all over him”.

He was shaken for months afterwards, she says; he even started wetting his trousers.

While she approached the school seeking support to help defuse the situation, she says its response was to expel him.

In future, we’re going to ask, ‘how did we allow this to go on?’

She feels the school had no interest in providing support, while she says Tusla’s response was that it did not “investigate schools, only parents”.

“He was just 11 and he was made out to be a monster . . . as far as the school was concerned, it felt it did nothing wrong.”

Today, a few years, her son is thriving in secondary school. She says he is receiving excellent support and has had no behavioural problems.

“He’s in a mainstream school where they know what they’re doing. The staff are trained. They respect him.

“I just feel that there was no accountability for his primary. . . In future, we’re going to ask, ‘how did we allow this to go on?’ Authorities know all about it, but are doing nothing.”