Will you graduate or drop out from college? Ask 'big data' 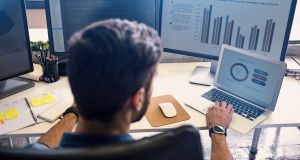 A growing number of Irish universities are using predictive analytics to spot students in danger of dropping out. Photograph: iStock

For several years, Dublin City University has been using data from students’ work online to analyse how they are coping with their courses.

If a first-year computer science student, for example, is struggling in their labs during the early days of their course, predictive analytics flags it automatically with a lecturer.

Should they continue to struggle with an assignment later in the semester, they can opt in to receive a copy of another one from a highly ranked and anonymous student.

“That way they can learn from their classmates,” says Alan Smeaton, a professor of computing at the university.

“All this is done using data analytics and machine learning, automatically flagging which students are in trouble, which are doing well and which assignments might be shared with others. It’s all part of the kind of learning analytics we do in DCU.”

They have been using this approach on an “opt-in” basis using data from so-called virtual learning environments, such as Moodle or Blackboard, which are the main way students these days access lecture notes, quizzes and other resources online.

“Every time a student logs on to the teaching resources, they leave behind a footprint that is the date, the time, the location, and the particular piece of teaching material – whether it’s a PDF or a quiz or a powerpoint,” says Smeaton.

Data is being gathered every year to help build up a profile of how students perform – and where they are at risk.

“What that means is that if we have enough years of previous runnings of a course, or good data to base on, we can make really good estimates as to a current student in week six, week seven, week 10, week 11 as to how they are likely to perform,” Smeaton says.

DCU is one of a growing number of colleges and universities using what is known as predictive analytics to spot students in danger of dropping out.

By crunching hundreds of thousands of student academic and personal records, past and present, they can help predict when students will need help.

Every year, about 6,000 students – or 14 per cent of all new entrants to third level – fail to make to the second year of their course.

This can have huge financial consequences for students – who face higher college fees – and can seriously dent their confidence and appetite for further learning.

While before students who struggled may have suffered in silence, students’ digital footprints are allowing colleges to intervene earlier.

“Students who are just coming into first year, they’re starting in September not having been in higher education before – currently, they are without this tool,” says Lee O’Farrell of the National Forum for the Enhancement of Teaching and Learning.

“The earliest an institution knows that a student is likely to fail is in February, once the grades are ratified, where they’ve already failed and it’s too late at that stage to do anything about it.”

The use of predictive analytics aims to change that.

“By looking at the data in this way, you can actually predict as early as the beginning of October the students who are likely not to have the kind of outcome that they want, and to be able to offer services and supports and resources to enable them to change that trajectory before it’s too late,” says O’Farrell.

At the end of the day, however, these are just digital warning lights – they do not replace the kind of vital human advice and support that’s needed.

“ Nobody is using this to define students, it just often gives an indication,” adds O’Farrell.

At present, DCU is using data only from virtual learning environments which they believe to be the most indicative.

In the coming years, they plan to add additional strands, such as attendance, library usage, and other exam and continuous assessment results to this system.

NUI Galway has taken a slightly different approach at the beginning of its foray into data analytics in relation to student performance.

“The way it has been approached in a number Irish institutions, as far as I’m aware, is that people have said, ‘we’re kind of sitting on a pile of data here, so let’s dig into this and see what we find’, but we said we would take a different approach,” says Sinéad Ní Fhaoláin, head of programme office and governance at NUI Galway.

“We went to key people in the university and asked, ‘what questions do you have that you would like answered?’ and we are looking into the data and seeing can we get answers for them that are useful to their daily jobs.

“We are trying to use predictive analytics to say, ‘okay, let’s take some factors about these students and see if they tell us which are the students that are not going to engage’, and we devise a score using an algorithm.”

At this stage, the data is passed on to the relevant university staff.

“The algorithm stops when it identifies the students, and then it is designed for human eyes – retention officers, whoever there might be at the university to say whether to intervene or not with that student. The data only goes to a certain point and then informs a pair of eyes behind that.”

This, Ní Fhaoláin hopes, will help both the students in question, but also retention officers and universities in general.

“The data is the underpinning, but the human intervention is being handled elsewhere.

“They [retention officers] have tried to do this in the past, they had to go to different people and different data sources, so this should make their lives more simple, and the journey to keeping students smoother.

“We identify these students and we offer support to them in whatever way is appropriate.”

How safe is students’ data? ‘There’s no comparison with Cambridge Analytica’

As data protection concerns abound, students may ask if the harvesting of their data is entirely necessary or safe?

Universities argue the approach is simply to better identify those in need of assistance; there is, they say, no commercial motive behind it.

“Many systems are using as much data as they can get on customers to improve their bottom line: they sell us a product or they sell us a service and they make money off it. Universities, we don’t want to do that,” says Alan Smeaton of DCU.

“Our output is qualified people and all that we want to do is to improve the quality of the experience, the quality of the education, to teach people in a better way. In comparison to other uses of data or big data, our bottom line is much more benign than other applications.

“I can’t see a downside at all – there’s no equivalent of a Cambridge Analytica.”

“It’s the difference between ‘watching’ and ‘watching out for’ them,” says Lee O’Farrell of the National Forum for the Enhancement of Teaching and Learning.

“Like with any tool, there’s always the potential for misuse, that’s why it’s critical that higher education institutions take their time to develop strategy and to start by defining their principles and their ethical approaches.”