Revealed: the universities most likely to award higher grades 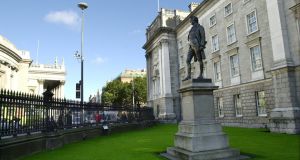 Students are most likely to get a first-class honour in Trinity (20 per cent) than in any other university, figures show. Photograph: Bryan O’Brien

The Irish Times has used a mix of Freedom of Information requests and statistics from the Higher Education Authority (HEA) to crunch the numbers.

The analysis shows grades at Ireland’s seven universities have been rising consistently over the past decade.

The patterns vary significantly across different institutions, based on the latest available data.

However, based on first-class honours, students are most likely to get a first in Trinity (20 per cent) than in any other university.

There are also interesting grade variations across subject areas within individual colleges, with top grades much more likely in some programme areas than others.

For example, in arts at UCD last year, just 8 per cent of students secured a first-class honour, while 55 per cent were awarded a 2.1.

On the issue of quality, there is no evidence of a decline in the quality of our graduates

By contrast, in business at UCD the proportion of firsts was almost twice that of arts – 17 per cent – while 72 per cent of all students received a 2.1.

Disciplines such as medicine are traditionally much tougher to secure top grades in.

At Trinity, just 7 per cent of medicine and dental science students secured a first, while 62 per cent received a second-class honour and 27 per cent got a pass.

An area where firsts are even harder to come by is education. At DCU’s institute of education, just 5.5 per cent secured a first-class honour.

So, why has this happened, what are the consequences of grade inflation and should we be worried?

Three researchers at IT Tralee have been working to highlight the extent of grade inflation in Ireland’s third-level institutions over the past decade.

Under the banner of the Network for Irish Educational Standards, Brendan Guilfoyle, Martin O’Grady and Simon Quinn’s work shows grade inflation is nothing new.

An analysis they produced of all third level colleges in 2007 showed that the number of first-class honours and upper second-class honours grades had surged over the previous decade.

Then, in 2016, Guilfoyle and O’Grady released further data which showed that the proportion of students at institutes of technology graduating with first-class honours degrees had doubled in the previous 15 years.

“If the regime is made easier, the lower end of the class doesn’t reap the same benefit as the top end. If, for instance, a lecturer drops a hint about the exam paper in class, the most alert students are more likely to be listening and get the advantage.”

First-class honours and 2.1 degrees are now well over 50 per cent of the overall graduate outcomes, at a time when many top graduate employers are hiring only those who secured a minimum 2.1 degree.

“If almost everyone is getting a 2.1, their degree could have less meaning. But the pressure from the Higher Education Authority and the management of the various third-levels is all one-way: the only way is up,” Guilfoyle says.

“Members of exam boards are reporting that they have to put up a fight to avoid a student’s grade being inflated.”

While there are substantial differences in the grades being awarded between different disciplines, the trends are generally the same across the board, says Guilfoyle: grades are steadily climbing up.

He says students are not coming into third level with the necessary maths skills needed for certain science, engineering and technology courses.

If the majority of degrees outcomes are the same, Guilfoyle says, there’s a risk that the only way to differentiate between the various institutions will be to look at where degrees come from, giving a further advantage to the most prestigious or elite institutions, particularly Trinity College.

Meanwhile, he says, the Bologna protocols which were developed to demarcate the difference in learning outcomes between a further education course, undergraduate and postgraduate course are being steadily undermined.

The HEA, however, rejects much of this analysis. A spokesman for the authority said it had not applied any pressure on higher education institutions.

“Grades are really a matter for the institutions,” a HEA spokesman said. “On the issue of quality, there is no evidence of a decline in the quality of our graduates and in fact, the national employers’ surveys show strong satisfaction rates with them.”

The watchdog for quality in third-level institutions, Quality and Qualifications Ireland (QQI), said grade inflation appeared to be a symptom of a variety of factors .

It said students were more focused on securing higher grades because degrees were being used far more widely for selection into employment or advanced studies.

This, in turn, had prompted changes such as greater levels of feedback for students on how to improve their performance in assessments, along with the spreading of assessment across a wider range of assignments.

“These are all features which could broadly be considered as improvements in higher-education practice, even if they are offset by factors such as declining resources per student,” the QQI said in a statement.

Employers, it said, often look at other factors – such as projects, placement reports and essays – if they want to discriminate fairly between applicants.

The QQI said debate over grade inflation may, in fact, reflect “social anxieties about status and competition for scarce safe niches is a precarious employment market than about deep-seated concern for the quality of education or learning”.

BH Associates, higher-education consultants, disputes whether grade inflation really is something we should be worried about, noting that the quality of learning should be a much bigger issue.

“The fact of grade inflation is, at best, a second-order concern,” says Tom Boland of BH Associates and former head of the HEA.

“What should be the primary concern and focus of attention, and action, for policymakers, universities and institutes, is the quality of the learning outcomes we are achieving from our higher-education system in terms of the readiness of graduates for fulfilling lives and with the skills society and the economy needs.”

Boland says the grades awarded at the end of a programme of study are an indicator of the quality of outcomes from that programme – an indicator validated by a system of external examiners.

After several years of discussion about grade inflation, Boland says that the evidence is that our graduates continue to be of high quality in terms of employability.

In its most recent study of the employment of graduates nine months after graduation, the HEA noted that for the class of 2016, 62 per cent of honours degree graduates were in employment, with just 5 per cent seeking employment.

Among those with masters degrees and doctorates, some 81 per cent were in employment.

Latest CSO data also indicates that the unemployment rate for those with an honours degree or higher was just 3 per cent.

By contrast, unemployment rates for those with a Leaving Cert or upper secondary education were almost three times higher (8.5 per cent) and more than four times higher for early school-leavers (12.5 per cent).

In fact, Boland says, grade inflation is a “sideshow” and a distraction from the real issue affecting the quality of outcomes from Irish higher education.

“We have had over a decade of seriously inadequate investment, both recurrent and capital, and the abysmal failure of successive governments and the wider political system to address the issue of how we can sustainably fund a system so central to the success of individuals and our society,” he says.