Staff protest over ‘grade inflation’ at institute of technology 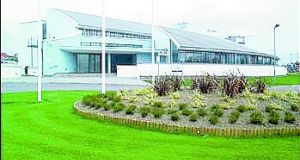 Lecturers at Institute of Technology Tralee are refusing to attend exam and course meetings after an exam board at the college overturned a lecturer’s marks for every student in his class.

The industrial action, which was voted for by 65 per cent of the members of the Teachers’ Union of Ireland at IT Tralee, has raised concerns about academic standards at the college and is likely to reignite controversy about “dumbing down” and grade inflation at Ireland’s universities and institutes of education.

The dispute follows the resignation of 14 of the 17 elected academic members of the college’s academic council. They took the move in response to an exam board upwardly revising marks for all students in an organisational psychology module taught by lecturer Martin O’Grady, who had failed every student in the class.

An external examiner had agreed with Mr O’Grady’s remarks regarding the students’ referencing, grammar, phrasing and critical thinking, stating that they had “struggled to articulate coherent arguments and often failed to justify some of the points they made”.

But he said there was some evidence of critical thinking and effort, albeit on a “superficial level”, and recommended all student marks for the module be increased by 10 per cent.

The exam board did not adhere to the external examiner’s recommendation and, instead, awarded the students the average mark from their other five modules.

After the resignation of members of the academic council, the college then reduced the quorum for academic meetings. The lecturers claim this was an act of “bad faith” which has subverted the intent of the legislation governing institutes of technology.

In a letter to college president, Dr Oliver Murphy, staff said exam results were relied on by employers to assess the competency of graduates, and by third-level institutions for entry to postgraduate courses.

They were also considered by professional and regulatory bodies who accredit graduates to work in particular vocations.

“We are strongly of the opinion that the methodology used and the scale of adjustment applied would not be acceptable to stakeholders,” they said.

“This may lead to the rejection of our awards and graduates. We consider that the provisional results issued . . . have compromised and undermined the academic standards and integrity of IT Tralee.”

The elected academics wrote to Quality and Qualifications Ireland (QQI), the statutory body charged with ensuring quality and standards in the further and higher education sectors, expressing their concerns, and stating that boards of examiners are required to be accountable to academic councils.

QQI declined to become involved and said the issue was an internal matter that should be resolved internally.

The college and the lecturers, however, have taken a different interpretation of the quality assurance guidelines issued by QQI.

In a statement, the college said the exam board was tasked with reviewing the overall profile of student results to ensure that their performance on modules falls within acceptable norms when presented with other modules on the programme, in the institute and at similar programmes offered in other higher education institutions.

“An examination board is entitled to adjust the marks of a module in order to negate the influence of [a] module mark on overall performance, and this is common practice in the educational sector,” it said.

IT Tralee added that members of the academic council approved IT Tralee’s procedures but some members who did not agree with the college’s position “would not accept the outcome of the vote and did not attend any subsequent academic council meetings”.

The college added that, as it considers it an academic matter, it could not be dealt with through the institute’s grievance procedure, but that it is prepared to engage with the Workplace Relations Commission to resolve the matter.

The institute says it has “robust quality assurance procedures” and that more than 85 per cent of its graduates are either in employment or pursuing further study.

The academics say that they have encountered “repeated difficulties in safeguarding academic standards” and they do not accept that exam boards can create any marks they wish for students.

Students had questioned the decision of the lecturer not to tell them what was coming up on the exam and claimed other lecturers were providing prior details of assessments to students.

Mr O’Grady’s grading decisions have, on several occasions, been upheld by external examiners.

The dispute comes at a sensitive time for the college, which is at a crucial stage in its merger with Cork Institute of Technology to form a new technological university.

Mr O’Grady is a founding member of the Network for Irish Educational Standards, which has raised concerns about grade inflation in Irish education.