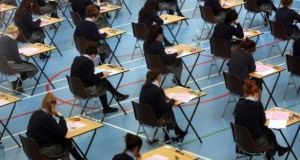 A spokesman for Minister for Education Norma Foley said it remained her ‘firm intention’ to hold a traditional Leaving Cert next June. Photograph: Dara Mac Donaill

A plan to hold a second set of Leaving Cert exams for students affected by coronavirus is under consideration by education authorities.

The move would ensure students who test positive for the virus, are designated close contacts or are otherwise unable to attend the exams in June are not left behind, sources say.

An advisory group meeting between the State Examinations Commission, the Department of Education and representatives of teachers and students to discuss this and other issues, such as options for holding oral and practical exams, will take place next week.

A spokesman for Minister for Education Norma Foley said it remained her “firm intention” to hold a traditional Leaving Cert next June. He said this will require a return to in-school tuition for sixth-year students.

Additional choice will feature in written exam questions to make up for lost school time, while extended deadlines are being provided for projects and coursework.

However, pressure is growing on Ms Foley from Government backbenchers and students to offer Leaving Cert students the option of predicted grades or sitting written exams.

A number of Fianna Fáil and Fine Gael TDs and Senators have joined Opposition parties in appealing for clarity on the issue “sooner rather than later”.

The Irish Second Level Students Union also called for an alternative to the Leaving Cert to be offered. The group’s president Reuban Murray said it was clear that exam-year students in particular were “really struggling”.

“Leaving Certificate students are entering their fourth month of online learning of a two-year senior cycle, and even though we knew that schools were not able to deliver online learning to the same standard last year, these gaps have not been filled or addressed in the intervening months,” he said.

“Now, we are looking at an uneven playing field for students in the home stretch towards exams, and student stress and anxiety is unbelievably high.”

Government sources say there is a reluctance to opt for calculated grades this year on the basis that a legal challenge against last year’s system is under way.

In addition, teachers’ unions are opposed to the idea of assessing their own students and want a traditional Leaving Cert.

The Teachers Union of Ireland insisted this week that the traditional exam had to take place on the basis that it is highly trusted, externally marked and enjoys significantly greater trust than the calculated grades system. The Association of Secondary Teachers Ireland has also said it wants the exams to go ahead as planned and has major concerns about a return to calculated grades.

This move means thousands of special needs assistants and resource teachers will be due back in primary and special schools on a full-time basis. Mainstream teachers, however, will not be required back in the classroom until schools reopen generally.

Details of the plans are contained in Department of Education letters being sent to primary school principals on Friday. Education sources also say there is growing hope that schools may be in a position to reopen to more students over the coming weeks if a downward trend in infection rates continues.

The department’s priority is to return special needs students in secondary schools – possibly towards the end of January – followed by sixth-year students and others in February.