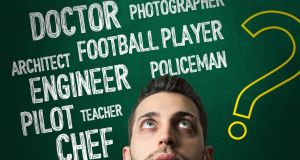 School leavers have until the end of June to finalise their course choices through the CAO system.

Parents are too often influencing their children to choose careers and college courses based on outdated information about the world of work, a university president has warned.

Dr Des Fitzgerald, president of University of Limerick, said the top graduate earnings and job prospects were in areas such as Stem (science, technology, engineering and maths).

However, parents – who are among the biggest influences on school leavers’ college choices – often know little about courses in new areas such as artificial intelligence, automation or robotics.

“Parents’ views of programmes that might best suit their children are often based on outdated information.

“The world of work and higher education have changed, and are changing rapidly. Many of the jobs which parents would have considered themselves when they left school no longer exist.

“Many new programmes in Stem and ICT [information and communications technology], for example, have among the best employment rates and starting salaries of any university programmes. But parents may not be aware of them,” he told The Irish Times.

His comments come as thousands of Leaving Cert students prepare to begin their exams on Wednesday.

School leavers have until the end of June to finalise their course choices through the CAO system.

Separately, there have been concerns expressed over the quality of guidance counselling available to students.

Last November a survey of 3,200 secondary school students showed less than half (44 per cent) were satisfied with counselling and career guidance services at their schools.

Minister for Education Richard Bruton is in the process of a wide-ranging review of the career guidance system in second and third level institutions.

He says the purpose of the review is to “ensure we are providing a high quality, relevant career guidance support service to all students from post-primary up to further and higher education”.

In 2012,an estimated 600 guidance counsellor posts were withdrawn from the education system.

Some 500 of these have been restored in the past two budgets, but there are still concerns many students, particularly those in post-Leaving Certificate (PLC) courses, do not have access to adequate career guidance.