What is Stem and why is it important?

Stem offers many career paths to graduates but what sets it apart from other areas of study? 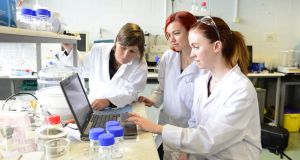 The Insight Centre for Data Analytics.

Our attitude to science, technology, engineering and maths (Stem) has completely transformed over the past decade. As the last recession started to bite, the popularity of Stem courses, in general, shot up, as did the CAO points requirements.

But many students are still uncertain about whether they want to build a career in it and, at third level, there are still more men on Stem courses than there are women.

Dr Ciarán Seoighe, deputy director of Science Foundation Ireland, says Stem is much more than a list of topics or subjects.

“It is, especially at third level, about learning a way to think, using creative and critical approaches to look at a problem and find new solutions. This is more developed at third level, where the focus is on taking the fundamental understanding of the basics developed at secondary school and evolving it with critical thinking. It’s here that we see, for instance, that an experiment giving us a null result is still important.”

One Stem graduate, Harry Austin, never expected to have a career in science. Austin, who began his studies in 2010 as a science access student in UCD, is now a PhD student and lead author on a project looking at an enzyme which, they have discovered, can digest some of the most commonly polluting plastics, providing a potential solution to one of the world’s biggest environmental problems.

“I studied biochemistry and molecular biology at UCD,” says Austin. “I was a 25-year-old mature student when I went to college. I was not academic at school, but when I started on a science access course at UCD, the lecturers were wonderful at instilling some confidence in me; it had been confidence that held me back. It has made me really passionate about helping others who feel they don’t have the academic potential to see that it is never too late.”

During his time at UCD, Austin became a mentor to other students and lent his voice to promote widening participation for students from disadvantaged areas at third level. He went on to volunteer to work with children in Tanzania and is now focused on his PhD research at the University of Portsmouth in England.

“If a PhD is advertised and is related to an area that interests you, go for it,” Austin says. “I chose this because I knew it could have a really positive impact on the environment. I love Stem that has real-world applications or can help mitigate climate change, and my work has given me the opportunity to work with the National Energy Lab in Colorado in the US.

“I’m also interested in the intersection between science and human behaviour: environmental problems won’t be solved unless the public changes their approach and we’re already seeing that explaining the damage caused by plastic straws is having an impact on consumer behaviour, because they understand that plastic has a lifetime of centuries and harms the planet. I’d now love to work in industry and applied research, particularly in an area that can make a change to people’s lives. Stem offers this opportunity.”

Seoighe agrees that students can be turned off Stem because they worry whether they have the right aptitude, especially in maths. “But you’d be amazed how much of Stem is about concepts and ideas, and imagining new solutions to problems. Yes, maths may be the language of some of the sciences, but it is not necessarily critical.

“That said, we would also encourage students to do what interests them, so if someone loves languages or drama but decides to study physics at third level because that’s where the jobs are, it may not be the best move. But if you have an interest, Stem provides good opportunities for your future.”

Seoighe says the subjects studied at third level – which include but is not limited to physics, chemistry, biology, geology, genetics, nanotechnology, and zoology; mechanical, civil, aeronautical, chemical, software, electronic and electronic engineering; biotechnology and computer science; and maths – opens up a world of opportunities for students across a range of industries, ranging from smaller indigenous start-ups to the many large multinationals based in Ireland.

“We understand that we all need to be able to read and write, and that is taken for granted, but we also need to understand maths and science,” says Seoighe. “It can open up careers in academia while, in the industrial world, someone who has studied biology could go into medical devices or drug development in a pharmaceutical firm. A physics graduate has the option of working in the exciting and young industries of artificial intelligence and quantum computing. There is a wide range of opportunities in areas such as biotech, nanotech, autonomous cars, drones and smart device manufacturing. But, speaking more broadly, a Stem graduate will be equipped to go into any career which requires them to creatively solve problems.”

Who are the top Stem employers in Ireland?

That depends who you ask.

Recruitment firm Indeed. com looked at where the largest number of jobs were available, and found that Stem firms held the top nine positions, with Amazon at the top followed by Workday, MSD, GlobeTech, Pramerica, IBM, Keyword Studios, Dell and Facebook.

A recent survey for The Irish Times, which focused on the top performing 1,000 companies, looked at global revenues and found that the top 10 firms were dominated by Stem firms, starting with Apple Ireland and followed by CRH, Medtronic, Google, Eaton Corp, Allergan, Facebook and Shire. Just one of the top 10 positions was held by a non-Stem firm.

But another way of looking at it is where students want to work. A survey of 7,500 students from throughout the island of Ireland, carried out by gradireland.com, asked students from science and engineering which companies they would most like to work for upon graduation.

Ruairi Kavanagh, editor of gradireland.com, says the views of students are informed by a mix of internships they have done, student marketing campaigns, and their own networks, peer groups, word of mouth and views from alumni.

So what were the deciding factors? Kavanagh explains: “Graduates want to work for ethical companies. They want to work for flexible companies, and 60 per cent say that they would be willing to accept a lower salary if the employer was more suited.”

The next gradireland survey of preferred graduate employers will be released in October when about 15,000 students are expected to be included.

Here’s the gradireland list as voted for by students. The top employers of science graduates are dominated by American pharmaceutical firms.

1. Pfizer: The maker of Viagra has been in Ireland for more than 30 years and is the second-largest pharma firm in the world in terms of total prescription revenue, with over €44 billion generated in 2017.

2. Boston Scientific: One of the world’s major medical device firms with almost €6.75 billion in revenues in 2017.

3. Abbott Ireland: US-based healthcare company which develops medicines, medical devices, diagnostic and nutritional products, the firm had revenues of about €32 billion in 2017.

5. GlaxoSmithKline: One of the most familiar names in the industry, this British firm with bases in Cork, Dublin and Waterford generated over €34 billion in 2017

1. Intel: American multinational tech firm with a long history in Ireland, based in Leixlip, Co Kildare. Revenue in 2017 was just under €53 billion.

2. BMW Group: The German car manufacturer has a strong presence in Ireland with opportunities to work in service, parts, sales, technical, finance and more. Global revenues in 2017 were €98.6 billion.

4. Jaguar Land Rover: The company recruits graduates for its UK and Ireland engineering graduate programme. As of March 2017, global revenues stood at just under €28 billion.

5. Jacob’s Engineering: Global construction, professional and technical services firm with offices in Cork, Dublin and throughout the world. In 2017, it took in €8.42 billion in revenue.